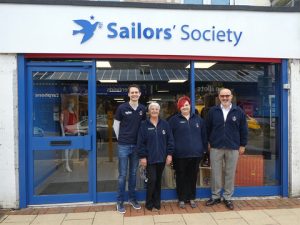 A new charity shop, opened on May 19 in Eastleigh, UK by international maritime charity Sailors’ Society, has ditched the fusty image traditionally associated with charity shops in favour of a fresh approach.

The store has the feel of a quirky boutique, using industrial décor including container-like dressing rooms and crates to reflect its work with merchant seafarers.

People were waiting outside for the doors to open and in the first hour alone goods were sold every two minutes.

It is more than 20 years since Sailors’ Society opened a new charity shop, by a new commercial team including south coast retail manager Paul Long-Collins, who has 35 years’ experience with household name brands including B&Q, John Lewis and Wyevale Garden Centres.

Paul said: “Charities are realising that we need to move away from the car boot or jumble sale feel, towards giving customers a more upmarket and enjoyable experience.

“The high street is becoming more competitive, with so many charities in the retail market, so we’ve been driven by a new vision to make charity retail more exciting.”

The Eastleigh shop is the first of four new shops the charity plans to roll out this year, with others due to open in Salisbury, Southampton and Poole. It already has shops in Farnborough and Aberdeen.

Sailors’ Society’s director of development, Adam Stacey, said: “These shops are a way for us to diversify our income so that, even in these challenging financial times, we can continue the vital work we do supporting hundreds of thousands of seafarers in need around the world.

“More than 90 per cent of everything we own comes by sea, sometimes at great cost to seafarers, who often come from the world’s poorest communities, spending up to a year at sea at a time and facing incredible loneliness, storms and even pirate attacks.”