The speaker was Hernan Delgado, former Deputy Magistrate of the Supreme Court of Justice, Former President of the National Bar Association, one of the founders of the MAG, founder of the creation of trade union organizations, Panama College of Journalists, FEDAP, UIBA, promoter of the FIA ​​and many other professional organizations in Panama. 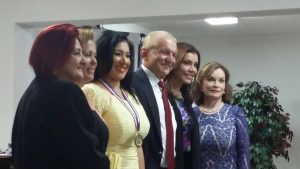 A defender of democratic values ​​and principles of Panama.

The Markets dive, the geopolitics are messy, terrorism must be smashed here and now!