The Paris MOU marks its 35th Anniversary by holding its 50th meeting in Gdansk, Poland 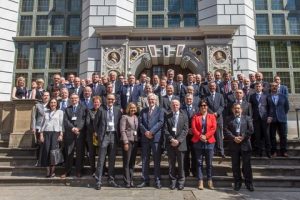 The Paris Memorandum of Understanding on Port State Control (Paris MoU) held its 50th Committee meeting in Gdansk, Poland, from the 22nd to the 26th May 2017, this special meeting was chaired by Mr. Brian Hogan. During the meeting, member States also commemorated the Paris MoU 35th anniversary and 25th anniversary of Poland being a member of the organization.

The Paris MoU welcomed the “Ministerial Declaration” signed during the 3rd Joint Ministerial Conference between the Paris and Tokyo MoUs held in Vancouver earlier this month. Secretary General Richard Schiferli expressed the view of the Committee that the declaration demonstrates that the Paris MoU and Tokyo MoU
members agree on the importance to safeguard responsible and sustainable shipping in order to further enhance safety, environmental protection and working and living conditions for seafarers. The declaration will provide political support to undertake port State control initiatives between the two regions.

The methodology for calculating flag and recognized organization (RO) performance, used for the targeting of ships for inspection, is being reviewed. The Committee agreed to move towards a new scheme to replace the current WhiteGrey-Black List and RO performance List in the near future.

High importance was given to the report of the Concentrated Inspection Campaign (CIC) on MLC, 2006. The CIC was carried out from September to November 2016. The general conclusion was that the results show a proper implementation of the  MLC requirements on board the ships inspected, and compliance on the MLC
areas focused on in the questionnaire.

The Committee took decisions in relation to the sustainability of shipping, includingthe Polar Code, Ballast Water Management and air emissions from ships.

On behalf of the member Authorities, Mr. Hogan concluded the meeting by remarking that significant progress has been made on port State control issues during this meeting. He thanked all member Authorities, the European Commission, EMSA and the Paris MoU Secretariat for their contribution. In particular Mr. Hogan thanked the Maritime Authority of Poland, for the excellent arrangements they made for this Committee meeting.