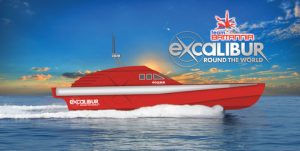 The Northern Irishman will join the record attempt, which hopes to break the current record of 60 days 23 hours 49 minutes, held by New Zealander Pete Bethune by more than a week.

Team Britannia, led by British ocean racing legend Alan Priddy, will use a revolutionary eco boat, which has been designed and built in the UK. The boat encompassing a ground-breaking design the boat will allow it to slice through the waves, rather than surfing them, or ploughing through them. This super-efficient design will reduce fuel consumption by up to 30 per cent and make the 23,000 nautical mile trip faster.

The boat will be crewed by a team of 12, including up to five wounded, injured and sick servicemen and women (WIS) on each of the seven legs of the voyage who are being supported by the limbless veterans charity Blesma.

Mr Priddy commented: “We are delighted to welcome Alan to the crew for the whole voyage and help us break the world record. After meeting Alan 14 years ago, I knew that he lives and breathes boats and water. His nautical experience, including on the lifeboats and passion will bring a real bonus to our stellar team.”

Alan Savage added: “After hearing Alan speak about his previous attempt in the Spirit of Cardiff some years ago, his story lit the touch paper of my ambition to join him on his next attempt. I’m quite a driven person with a passion for being on the water, so being part of Team Britannia fulfils a personal ambition to be part of an amazing team that will bring the world record back to Great Britain.”

Alan, who comes from Northern Ireland will be an Assistant Bosun on the Team Britannia record attempt.

Alan first got interested in RIBs and boating due to a friendship with another Team Britannia crew-member back in 1999. In 2000 he became a volunteer lifeboat crew-member on the Donaghadee lifeboat in Northern Ireland, reluctantly stepping down after five years when he moved to Annan in Scotland.

Since moving to the picturesque town on the north coast of the Solway Firth, Alan has been active in his local community. In 2014 he  joined the management committee of the Annan Harbour Action Group where he is both a Trustee and the groups secretary. The Charity is working to restore the town’s old harbour making it accessible and user-friendly for the entire community.

The record attempt will get underway in October 2017 using the iconic Europa Point in British Gibraltar as the official timing mark.

Mr Priddy concluded: “We are just a couple of months away from launching the boat and getting underway on the one of the most difficult and exciting world records attempts.  Crucial to our success is making sure we have an outstanding crew both on the boat and shore-based and I am confident we have and Alan is a great addition to this.”

Lloyd’s Register: First ships in the world to be certified Cyber SAFE delivered

The Paris MOU marks its 35th Anniversary by holding its 50th meeting in Gdansk, Poland