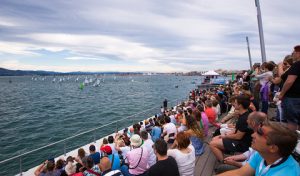 Crowds watch on during the 2014 Worlds

Olympic sailing will make a return to Santander, Spain for the finale of Sailing’s 2017 World Cup Series from 4-11 June 2017.

The Spanish city hosted a memorable Sailing World Championships in 2014, welcoming more than 1,000 sailors from 84 nations racing across the ten Olympic events.

Across two weeks of competition in 2014, 400,000 spectators were treated to an elite competition and cultural festivities. Fast forward to 2017 and anticipation is rising once again as the city combines sport and entertainment for the World Cup Final.

All Olympic medallists qualified automatically for the 2017 World Cup Final. Rio 2016 gold medallists Giles Scott (GBR) and Peter Burling and Blair Tuke (NZL) will be in Bermuda for the America’s Cup so will miss out on Santander. However, their fellow gold medallists, Dorian van Rysselberghe (NED), Martine Grael and Kahena Kunze (BRA), Hannah Mills (GBR) and Marit Bouwmeester (NED) will all be in Santander, looking to add to their growing list of accolades.

The World Cup Final will be van Rysselberghe’s third outing following Rio 2016. The Dutchman recently took gold at the Delta Lloyd Regatta in Medemblik, The Netherlands and he will be full of confidence heading into Santander.

Van Rysselberghe made history at Rio 2016, becoming the first windsurfer to successfully defend an Olympic title. The Dutchman claimed Rio gold in style and if he comes close to replicating that form in Santander he will be a hard man to beat.

Louis Giard (FRA) is the form sailor in the Men’s Windsurfer having won gold at both World Cup Series events in USA and France as well as the European Championships. He will be aiming to continue his winning streak at the World Cup Final.

Poland’s Piotr Myszka defeated the Dutchman and Frenchman at the 2016 World Championships, claiming gold, and will be on the startline in Santander and amongst the favourites. Further contenders include World #1 Mateo Sanz Lanz (SUI), World #3 Kiran Badloe (NED) and World #4 Ivan Pastor (ESP).

Klepacka is the form racer, winning all four of her previous regattas including the 2016 World Cup Final in Melbourne, the recent World Cup Series event in France and the European Championships.

Rio 2016 Women’s 470 gold medallist Hannah Mills (GBR) stepped away from the two-person dinghy after the Olympic Games to try her hand at the Women’s Skiff, 49erFX.

She will be temporarily back in the two-person dinghy at the World Cup Final, sailing with Eilidh McIntyre. Although Mills’ credentials speak for themselves, she is not necessarily the favourite for the title.

Dutch racers Afrodite Zegers and Anneloes van Veen have been unstoppable in 2017, winning six consecutive regattas including the American and French legs of the World Cup Series.

After Rio 2016, most of the Women’s 470 Olympians opted to explore new routes in sailing, enjoy a period of rest or retire. Zegers and van Veen wasted no time in getting back into the groove and are reaping the rewards.

Racing at the 2017 World Cup Final in Santander, Spain will commence on Tuesday 6 June at 12:00 local time.

Live Medal Races on Saturday 10 and Sunday 11 June will bring the 2017 series to a close.