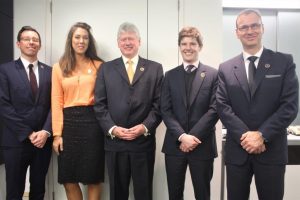 Four marine claims experts have achieved one of the sector’s highest accolades in qualifying as Fellows of the Association of Average Adjusters. The number of new Fellows is one of the best on record, within a sterling year for the Association in terms of examination results.

Studying alongside their demanding day jobs involving active casework, the four passed all six modules of the rigorous Association examinations. There was further good news resulting from the March 2017 papers, when 16 men and women qualified as Associates. They joined the 15 new Associates who emerged from the October 2016 exams.

The Association now lists a record 42 Fellows and 133 Associates worldwide. In March, two people qualified as Senior Associates, bringing the number in that relatively new category to 15. The Senior Associate title was established in response to demand from those who work in offices not specifically dedicated to adjusting, for pursuing courses to a point short of becoming fully qualified Fellows.

Mr Martin formally presented the Fellowship certificates at the annual meeting of the Association, which was hosted this year at the offices of law firm Clyde & Co.

Ms Robinson is an adjusting manager with Richards Hogg Lindley in London. She graduated in 2008 with an LLB (Hons) in Law from Sheffield University. She joined Richards Hogg Lindley in 2010 and completed secondments to the Hong Kong and Jakarta offices in 2013. Her role mainly involves handling and adjusting claims in hull and machinery, loss of hire, salvage and general average.

She said: “I think there will be a continuing, if not increasing need, for experienced and skilled marine claims practitioners. I really enjoy the complexity and variety of cases and the global nature of the work, both in terms of dealing with clients overseas and the opportunities to work abroad.”

Ms Robinson added: “I think the exam process is important and valuable in maintaining quality and consistency across the marine adjusting profession. Hopefully the new Senior Associate qualification which was introduced last year will encourage more claims practitioners to take the exams.”

Andrew Slade graduated in 2010 with an LLB (Hons) in Law with French, which included a year studying law and economics in Aix-en-Provence, France. Having joined Richards Hogg Lindley in 2011, in 2013 he moved to the group’s largest marine adjusting office, in Jakarta, Indonesia, to lead the hull department, returning to London after two years.

Mr Slade said: “A career in average adjusting offers both variety and narrow expertise; while the subjects in question are niche, no two cases are the same. We benefit from a collaborative working environment in which the questions of law, principle and practice provoked by the variety of casework are discussed and debated as part of daily office life.

“Aside from the law and practice of marine insurance, the role of the average adjuster in resolving problems in ways that are acceptable to the various parties (shipowners, interests concerned in cargo, charterers etc, and their insurers) requires an understanding of their respective commercial considerations, as well as a working knowledge of elements of marine engineering.”

Mr Slade observed: “The Association examinations are essential in maintaining the level of skills in the marine insurance industry; by studying towards them, we come to better understand the principles on which law and practice are established, and it follows that we are better able to apply them according to the demands of each particular case.”

Robert Tomlinson is an average adjuster at Richards Hogg Lindley. He joined in March 2009 after graduating from Birmingham University with a degree in Ancient History. He has a wide range of experience handling hull and machinery, loss of hire and general average claims. He completed secondments in the Jakarta and Hong Kong offices of Richards Hogg Lindley in 2012 and 2014.

“Adjusting is an historic, complex and varied role and no case is ever the same,” said

Mr Tomlinson. “This, allied with the truly global nature of the work, ensures that the job is always interesting.”

Mr Tomlinson said: “The Fellowship exams are extremely tough and stand as testament to the quality and standard of the adjusting profession. What is particularly encouraging is the value which appears to be placed on the qualification by the wider market.”

Mr Magkanaris began his career at the National Academy of Greece while gaining sea service. Upon graduation as a third engineer, he continued his studies in the Mechanical Engineering Department at the University of Surrey, attaining his Bachelor’s degree with Honours and then a Master’s in Marine Technologies at the University of Newcastle-upon-Tyne.

He worked in the newbuilding project management department of a shipping company, where his assignments included supervising three newbuilding containerships in South Korea followed by three panamax and seven post-panamax containerships. He joined The Swedish Club as staff surveyor and later was technical manager and marine claims executive, surveying and handling on site, on behalf of the insurers, a variety of marine casualties.

Mr Magkanaris said: “What I find spectacular in adjusting is that the technical issues of a case, considered from an insurance law perspective can be nothing like originally contemplated.

“It is amazing how the profession combines the practice of a tradesman with the technical issues involved in the handling and repairing of vessels, brought together by the marine insurance law principles.

“The professional in any field should not only know ‘how’ something is done but, more important, he or she should understand ‘why’ something should be done in a particular way. It is exactly this ‘why’ that one discovers by following the curriculum of the exams.”

The Fellowship exam modules have a minimum pass mark of 75%.

The modules are: Marine Insurance Act 1906 and related insurance principles; hull and cargo claims; general average, salvage and Carriage of Goods by Sea Act; hull claims including loss of hire; collision liabilities, ancillary insurances on ship and cargo claims; and practical adjustment. A new exam module, Upstream and Offshore Energy Claims (A3) was announced in September 2016, and from October 2017 can be taken as an alternative to Paper A2 (Hull and Cargo Claims) to achieve the Associateship qualification.

Mr Martin said that there were encouraging signs of interest in the A3 module since its availability became known.

The chairman praised the work of David Pannell, convener of the 14-strong examining committee, and his colleagues who had spent many hours setting and marking papers.