London is alive and kicking; no fear! 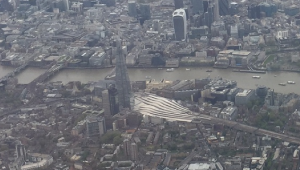 The despicable atrocities by an organised group of Islamist terrorist cowards late last night here in London (22:08 BST), in one of Father Thames’ London bridges, the often crowded London Bridge and its adjacent popular area including the Borough Market, will NOT stop life going on, despite what these cowards continue to perpetrate in a very inhumane way and as it appears from their actions, have planned and continue to plan.

Despite the fact that within a very short period of time with three despicable attacks – Westminster Bridge, Manchester Arena and London Bridge – in the United Kingdom, the morale of all is more than high and NOTHING will affect us in our everyday life from these appalling terrorists’ actions. No fear!

We in the world of shipping all over Planet Ocean, as we have stated many times in this medium, we are very much concerned with these despicable terrorist and piracy actions, as crew members and seafarers travel on a daily basis, executives of every kind within our industry by all means of transport going through all centres, hubs, ports and airports, hotels you name it; we warn these cowards that our response will be lethal to all of them and I am sure many decent people will step in and support the authorities worldwide.

We expect the politicians here and all over the world to show ZERO tolerance here and now; it is about time! Good to hear that prime minister Theresa May said “it is time to say enough is enough”! One of the most powerful declarations ever heard in condemning these Islamist militancy actions!

It is about time that these “people” and their sick ideological as well as religious actions against the free world and democracy come to an end, before democracy counters as has happened in its 2,500 plus years of existence. Enough!

We express our sincere condolences to all those who have lost their loved ones last night, to all those who have family and friends injured at a renowned tourist and ‘night out’ area of London; our thoughts and prayers are with all those all over the world who have suffered the anxiety of seeking to establish that those dear to them are safe. Mothers and fathers from all over the world whose children study over here, were the first to react and contact us!!!

Ending this message, we remind you that every single day we end our Markets and Geopolitics reports by advising and warning everyone, all over Planet Ocean, to be on guard against acts of terrorism and piracy no matter where.

Congratulations to the London police and emergency services for their more than ever swift response in eight and six minutes respectively to this despicable atrocity. We praise them all and in particular those injured last night and in the previous attacks – even to loss of life. The public’s immediate support and reaction was unique in immediately offering help to all those in need! This proves the hidden power and ethics, humane character of the public in responding under exceptional circumstances, even endangering their own lives, in such terrible events.

Consultation on foresight review on the public understanding of risk