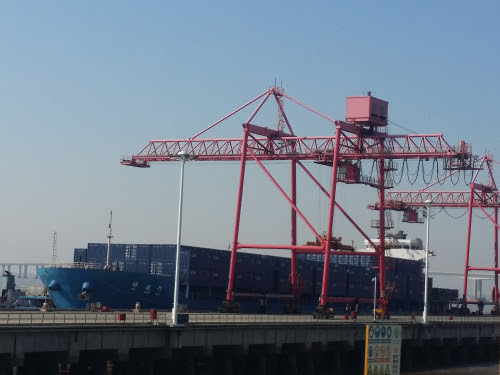 A leading company based in China, Singamas QSOE is to transport containers in BLOKs in a bid to dramatically speed up loading and unloading empty containers by up to 400 per cent.

Singamas is one of the world’s leading container manufacturers, an operator of terminals and container depots and is a subsidiary of the PIL Shipping Line.  The company is working with UK based company BLOK-Container Systems which has devised the BLOK system for handling empty containers.

The initial project which will commence in early autumn 2017 will see Singamas QSOE assemble BLOKs of containers at Quidong Terminal alongside its manufacturing facility on the outskirts of Shanghai, China and transport the BLOKs via barges to the Port of Taicang using all the elements of the system the BLOK-Spreader, BLOK-Trailer, BLOK-Locks and SATS.

The BLOK-Container System will work like this. The containers will be formed into blocks (‘BLOKs’) in advance during normal working hours. BLOK-Locks will be used alongside SATs to pre-lash the containers together in one secure BLOK ready for shipping.

The BLOKs will be assembled two containers high ‘off quay’ by teams of stevedores using a special self-jigging trailer called a BLOK-Trailer, which has been manufactured by Singamas QSOE.

Further work on the system is looking at the use of BLOKs of six containers which will add more efficiency gains. The system works equally well with 20ft, 40ft and 45ft containers using a longer version of the trailer. The trailer also has applications for laden containers at ports around the world further boosting efficiency, particularly in association with the use of tandem lift spreaders.

Blok Container Systems, Director of Sales and Marketing Selwyn Rowley said, “This will be a great opportunity to implement all aspects of the system prior to working with other port terminals and shipping lines and in the near future.”

Consultation on foresight review on the public understanding of risk