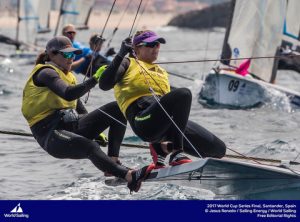 Martine Grael and Kahena Kunze of Brazil in the 49erFX

The Men’s and Women’s Skiff, Windsurfers, Mixed Multihull and Foiling Formula Kiteboarding all concluded their fleet racing and the top ten racers will now advance to Saturday’s live Medal Races to fight to become the World Cup Final Champion in their respective fleets.

Brazil’s Patrcia Freitas has opened up a 20 point advantage over the chasing pack and only a disqualification on the final day will see her lose gold. Fernando Echávarri and Tara Pacheco (ESP) have a firm hold in the Nacra 17 whilst the Men’s and Women’s Skiff fleets will see final day duels for the titles.

Friday’s conditions served up exceptional conditions for the 260 sailors from 41 nations with a steady north east breeze in the region of 12-14 knots.

The Men’s and Women’s Skiff Medal Races will see some close-knit battles with minimal separation between the leading competitors.

James Peters and Fynn Sterritt (GBR) lead Poland’s Lukasz Przybybtek and Pawel Kolodzinski by a single point in the 49er. Dylan Fletcher and Stu Bithell (GBR) are knocking on the door in third.

Three races played out for the 16-boat 49er fleet and the leading trio did enough to hold firm in the medal positions. Local favourites Diego Botin and Iago Lopez (ESP) are eight points off the podium places.

Rio 2016 Olympic gold medallists Martine Grael and Kahena Kunze (BRA) and Great Britain’s Charlotte Dobson and Saskia Tidey have been fighting hard all week in the 49erFX. When you think the initiative swings one way, a counter attack ensures somewhat of a level playing field.

Grael and Kunze were able to extend their overnight single point lead to three after a steady trio of results. “It was quite a tricky day because it was so shifty to the right of course,” said Kunze, “So people who had a good start from port did really well. We struggled a little in the second race.”

Grael added, “We found it difficult to cross because there were a few boats ahead of us.”

By their own admission, the Brazilians have had somewhat of a mixed week in Santander but a lead is a lead and they’re excited for the final showdown, “At the end of the day, with all the ups and downs we still opened three points so we are feeling confident ahead of tomorrow.”

The biggest smile of the day in the boat park was reserved for Brazil’s Patricia Freitas who won all three races in the Women’s Windsurfer, RS:X. The Brazilian managed to open up a 20-point lead over China’s Yunxiu Lu, who is guarantted at least bronze, and needs to stay out of trouble in the Medal Race to confirm gold.

“It was an exceptional day,” said Freitas through a beaming smile. “We had amazing sailing conditions today, we had light winds at first but it picked up fast. Above all, I had good speed and I was happy about that.”

Stefanie Elfutina (RUS) completes the podium ahead of the Medal Race with Majia Zheng (CHN) following.

Kiran Badloe (NED) matched Freitas’ perfect day with one of his own. A trio of race wins hands him a 16-point advantage over Louis Giard (FRA) who in turn is eight points clear of Shahar Zubari (ISR).

In the Mixed Multihull, Nacra 17, Fernando Echávarri and Tara Pacheco (ESP) moved 18 points clear and without any major dramas, should seal gold on Saturday. John Gimson and Anna Burnet (GBR), Tom Phipps and Nicola Boniface (GBR) and Italy’s Ruggero Tita and Caterina Marianna Banti are split by six points and will go for the two remaining podium places.

France’s Nico Parlier has almost wrapped up gold in the Foiling Formula Kiteboarding. He is 27 points clear of Guy Bridge (GBR). Only a disaster from tomorrow’s Medal Race Series – three single point races – will see Parlier lose his grasp on the gold medal.

The Men’s and Women’s Dinghies entered a critical point of the week with just two fleet races remaining on Saturday.

Panagiotis Mantis and Pavlos Kagialis (GRE) maintained their lead in the Men’s Two Person Dinghy, 470. Stu McNay and Dave Hughes (USA) managed to post a 2-4 to advance to second, eight points off the leaders.

The ongoing battle between Jean Baptiste Bernaz (FRA), Charlie Buckingham (USA) and Philipp Buhl (GER) continued today in the Laser, Men’s One Person Dinghy, with minimal separation once again between the trio. Bernaz leads on 31 points and Buckingham and Buhl followed on 35 and 37.

Hungary’s Zsombor Berecz shone above the pack in the Men’s Heavyweight One Person Dinghy, recording a 2-1 to move into second place and within two points of leader Ben Cornish (GBR). Ed Wright’s 8-8 sees him third overall.

Medal Races are due to commence at the earlier time of 11:00 on Saturday 10 June. Catch all of the action on World Sailing’s YouTube Channel.

Gains for the BDI@849, Wets are down and Geopolitics more than messy