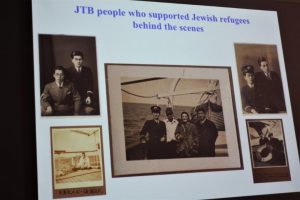 Chiune Sugihara, a diplomat at the Japanese consulate in Kaunas, Lithuania in 1940, is greatly honoured in Japan.

Flouting his government’s instructions and its alliance with Nazi Germany, he granted an estimated 2,139 transit visas to Jewish refugees who flocked to the consulate seeking to escape Europe for Asia and the United States. He became known as “the Schindler of Japan” after the movie Schindler’s List was screened in Japan, although Mr Sugihara’s actions was more altruistic than the factory owner. 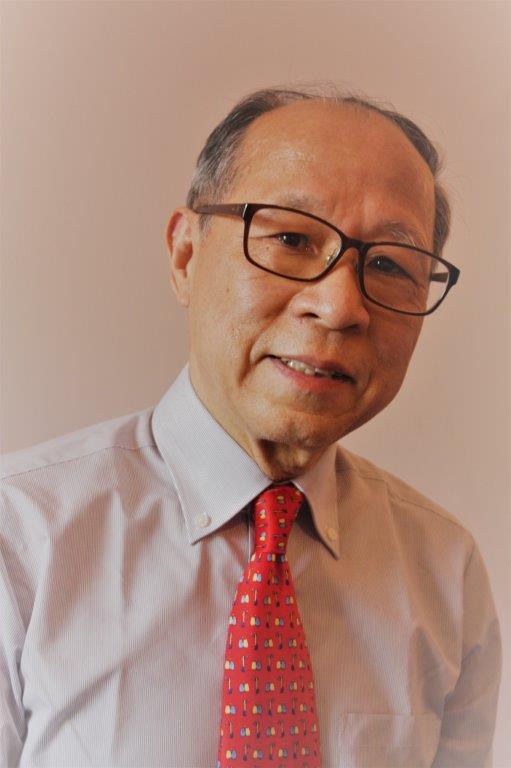 There are two other vital elements to this Japanese story. One is the role of Dutch diplomats whose country was also under pressure from Hitler’s regime, and another involves the selfless service of Japanese seafarers and tourism officials.

The episode was movingly related, at an event in London organised by the Daiwa Anglo-Japanese Foundation, by a man who has devoted his recent years to researching the fate of those involved. Akira Kitade. with the assistance of the Embassy of Israel in Japan, has traced some of the descendants of those who endured a nightmare train journey across Europe to the Pacific port of Vladivostok, for onward travel to Japan on an elderly ship named the Amakusa Maru.

Among the heroes in the story is Tatsuo Osako, an employee of the Japan Tourist Bureau, who was co-opted as a purser on the Amakusa Maru to accompany the refugees. Mr Kitade has through his writings and lectures striven to ensure that the honourable contribution of the Bureau is deservedly better known.

Mr Kitade worked with Mr Osako as a junior in the conventions department of the Japan National Tourism Organisation for three years from 1966, but only 20 years later got to know of his remarkable wartime role as a crew member on the ship providing safe transport for the refugees across the Sea of Japan. Mr Kitade chanced upon it on reading a company history of the Japan Tourist Bureau.

When the two met again in 1998, the modest Mr Osako was reluctant to talk about his past but did produce an album of the photos which had been sent to him by Jewish passengers. The photos are inscribed with messages of praise and thanks. 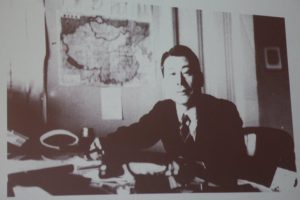 Deeply moved, Mr Kitade felt that the efforts of the tourist bureau should be recorded for posterity and embarked on research for a book, which he would call Visas for Life and the Epic Journey – how the Sugihara Survivors reached Japan.

The Jewish refugees had been trapped in the Lithuanian city, in face of Soviet and German conflict. Mr Sugihara had already been ordered by his superiors to lose the consulate, but his conscience led him to heed the desperate pleas of Jews besieging his office. He kept handing out travel authorisations to the last minute – even at the train station on his way out of Lithuania.

The visas were for travel via Japan to a third country but allowed the bearer to stay for only 10 days. The refugees were required to have enough money for travel and their needs while in Japan. They endured a gruelling two-week journey on the trans-Siberian railway from Moscow to Vladivostok, from where they were to board ships for the often rough and dangerous voyage to Tsuruga, a port on the Sea of Japan. Many Japanese along the way assisted the refugees with their escape.

It had been It was touch and go whether the fugitives would get through to Japan. When Tokyo sought to block the wave of refugees, Sahuro Nei, the Japanese consul at Vladivostok, protested that this threatened the prestige “of our Empire’s embassies and consulates abroad.” Mr Nei, who was a friend of Mr Sugihara, opened the way for the refugees to board the ships.

The first ship to leave Tsuruga for the mission was the 5,000 gt Harbin Maru, on September 10 1940, although it turned out to be too large for the berth at Vladivostok.

The refugees fled in only the clothes they were wearing and many had little money on them. Cash and valuables were confiscated by the Soviet officials. 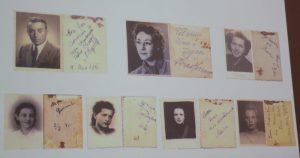 Money did arrive, from the Jewish Society in the US, and the Japan Tourist Bureau was asked to see that each refugee received their share. The bureau set up a temporary office in Tsuruga, where employees were stationed along with travel agents to accompany the refugees from Vladivostok. The employees during the voyage checked the passenger lists and ensured the money sent from New York was handed over.

The Amakusa Maru was of just 2,300 gt and already 28 years old.  It took three days and two nights for the ship to cross the Sea of Japan, which was so stormy in winter that the passengers, accommodated in windowless cabins, and even some of the crew, were seasick. About 400 refugees were transported at a time in a pitching and rolling ship which had a normal capacity of half that number.

Mr Osako, without previous seagoing experience, was made assistant purser and made the crossing more than 20 times. His memoir spoke of the Japan Tourist Bureau staff taking “pride in our role as bearers of private-level diplomacy.”  The “baton for life” had been handed to them by the official diplomat Chiune Sugihara.

At Tsuruga, the Jewish contingents were welcomed by local people, before moving on to the ports of Kobe and Yokohama, which had Jewish communities, and from where they evacuated to the US – at a price of $40 from the former port and $50 from the latter – and other countries. Some 40,000 descendants of the refugees are alive today.

Mr Osako was after the war the first Japan Travel Bureau man to work on the American president Line steamship President Wilson, of 18,000 gt, which plied between Yokohama and San Francisco.

After Mr Osako passed away in 2003, Mr Kitade was determined to find out what happened to the people in the photographs despite the dearth of information in the album. The quest took him in September 2010 to Houston, Boston, New York, and Washington DC, to show the album to people who might be related to survivors. 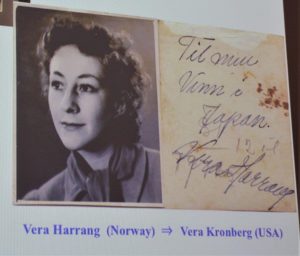 The first woman in the album he identified was the late Sonia Reed, who had written by her photo “Please remember me. To a wonderful Japanese.” She had lost her parents and two sisters in the Nazi purge. Mrs Reed was born Zosia Gertler in Lodz, Poland, and Mr Kitade located her daughter Deborah.

Antonina Altzuler from Poland lost her entire family in the Holocaust; she married in the US to become Antonina Babb, and when she died in Santa Monica, California, in 1994 bequeathed $590,000 for Jewish studies.

Nissim Segaloff, a Romanian, was later known as Nicholas Sargent of Seattle and “the best backgammon player in the world.” The date of his death is unknown.

Vera Harrang, born in 1917, was a gentile, a Resistance fighter and member of the Norwegian Red Cross, who later became Vera Kronberg. She died in New Jersey in 2001. In December 2015 Mr Kitade visited Mrs Kronberg’s only daughter Lindy in a suburb of New York. 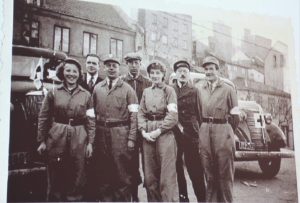 Dr Sylvia Smoller received visa No 459 out of 2,000, which enabled her and her family to escape to the US.

Leo Melamed, chairman emeritus of Chicago Mercantile Exchange Group, was born Leibel Melamdovich in Bialystok, Poland, in 1932. Mr Kitade met Mr Melamed in the US, who told him that without Mr Sugihara issuing a visa to his family, he would not have survived the Holocaust. The family voyaged to the US in 1941, to settle in Chicago. Mr Melamed visited Japan in 2014 to meet with Prime Minister Shinzo Abe.

Mr Sugihara (1900-86) risked his life and career to issue the “visas of life” between July 27 and August 28, 1940. He was expelled from government service after returning home. Today the Port of Humanity Tsuruga Museum, which pictures Mr Sugihara on its brochure, can be visited, as can the Sugihara memorial hall in his home town of Yaotsu. 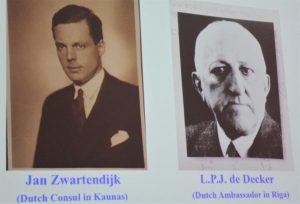 Mr Sugihara had previously served his foreign affairs ministry in China, where he had become uneasy over the way the Japanese government treated Jewish people.

He was honoured in 1985 as Righteous Among the Nations by Yad Vashem, the Israeli Holocaust Remembrance Authority.

In his talk in London, Mr Kitade was keen to give credit to two Dutchmen, who have featured less prominently in accounts of the exodus. The Dutch ambassador in Riga LPJ de Decker (who represented the Dutch government in exile in London) authorised the honorary Dutch consul in Kaunas, Jan Zwartendijk, to issue documents – about 2,400 of them– for entry to the Dutch possessions of Surinam and Curaçao.

According to the US Holocaust Museum: “The permits declared, ‘an entrance visa is not required for the admission of aliens to Surinam, Curaçao, and other Dutch possessions in America.’ The permits failed to mention that admission was the prerogative of the colonial governors, who rarely allowed it. De Decker and Zwartendijk had reacted to the human crisis in their midst by issuing documents that were useless except for one purpose—they helped refugees flee from Lithuania.” 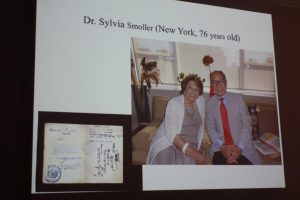 Mr Zwartendijk (1896–1976) who worked for the electrical equipment company Philips, was in 1997 awarded the honour of Righteous Among the Nations.

Mr Kitade said: “It is quite natural that we should praise Mr Sugihara, who is mentioned in many textbooks, in articles, a film (Persona Non Grata, premiered in Lithuania in 2015) and an opera (Incident in Lithuania, premiered in 2006), but none mention a single word about Mr Zwartendijk, and we should not forget the role he played.  I feel a kind of guilt in regard to Mr Zwartendijk and the Dutch people.”

Mr Kitade appealed to his audience to join him in making the role of Mr Zwartendijk as widely known as possible.

He said that the friendship of the Jewish people towards the Japanese owed much to the “visas for life” issued by Mr Sugihara. Many Jewish communities offered assistance to victims of the Japan earthquakes of 1995 and 2011.

Mr Kitade has written: “I want as many people today as possible to know that there were Japanese people who acted conscientiously and in good faith in the midst of the chaos that was World War II.”

Mr Kitade’s 2014 book Visas of Life and the Epic Journey: How the Sugihara Survivors reached Japan was highly commended by the Japanese government and donated to more than 1,000 major libraries across the world.

In all, some 65 diplomats from more than 22 countries are reported to have issued visas to enable Jewish people to escape the Holocaust.

The BDI@903; nothing spectacular…