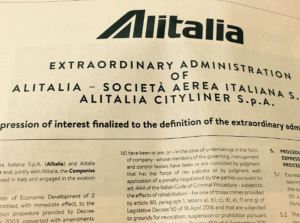 6 JULY 2017 BY GARBAMAR
At the hearing held yesterday morning, 5 July 2017, before Judge Sean H. Lane of the U.S. Bankruptcy Court in the Southern District of New York, ALITALIA finally succeeded in getting legal recognition of its domestic bankruptcy procedure (the Extraordinary Administration).

As a result, the NY Court recognized the insolvency proceedings opened by the airline before Court of Civitavecchia in May 2017 and granted ALITALIA US creditor protection. Alitalia generates almost a third of its sales there and has already been on the runway at the New York JFK airport.

Chapter 15 gives ALITALIA some breathing room with US creditors during this very crucial period where a call for tender is still outstanding and the Official Receivers are facing day-by-day troubles in keeping up on going business of the airline.

(1) the foreign proceeding is a foreign main or foreign non-main proceeding,

(2) the petition for recognition was filed by a foreign representative, and

Assuming all three criteria are satisfied, recognition should only be denied if recognition would be “manifestly contrary to the public policy of the United States”. In general, other than allegations that the petitioner failed to satisfy any of the three requirements of §1517(a) of the Bankruptcy Code, the only ground to object to the recognition of a foreign proceeding would be that such recognition would be manifestly contrary to U.S. public policy. As the legislative history explains and the courts have noted, this public-policy exception should be narrowly construed and only “invoked when the most fundamental policies of the United States are at risk.”

Upon recognition of a foreign main proceeding, certain protections arise automatically in favor of the foreign debtor under §1520 of the Bankruptcy Code, including the imposition of an automatic stay under §362, pursuant to which parties are enjoined from continuing or commencing any actions against the foreign debtor or its assets. Recognition as a foreign main proceeding is advantageous because it eliminates the procedural hurdle of having to seek court approval for a stay or related relief.

Although recognition of a foreign proceeding is designed to be relatively expeditious and straightforward, it is well established that recognition should not be “rubber stamped” by the Courts. Indeed, the mere fact that recognition is unopposed will not preclude a Court from analyzing the pleadings to determine whether the petitioner has satisfied its burden. A petitioner should make every effort to demonstrate that it has satisfied its burden of meeting the requirements for recognition set forth in §1517 of the Bankruptcy Code. Once the Court is satisfied that the petition and the foreign proceeding meet the requirements of chapter 15, and in particular §§1502 and 1517, recognition should be granted, unless such recognition would be manifestly contrary to United States public policy.

As a result, ALITALIA succeeded in satisfying all above criteria so getting the US Chapter 15 protection against US creditors.

Climb aboard Kaskelot as she makes her debut at TheYachtMarket.com Southampton Boat Show 2017