Climb aboard Kaskelot as she makes her debut at TheYachtMarket.com Southampton Boat Show 2017 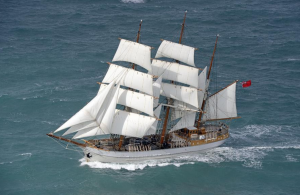 This September, Kaskelot’s historic decks will be explored by thousands of visitors at TheYachtMarket.com Southampton Boat Show where she will star as a key attraction for the 10 days of the event.

Moored alongside 330 of today’s most innovative sail and motor boats on the Show’s own stunning purpose-built marina, Kaskelot, with its knowledgeable crew and state-of-art restoration, will offer a treasure trove of stories and adventure for all visitors to explore as they step onboard this three-masted barque.

One of the largest remaining wooden ships in commission, measuring 46.6m, she was built in Denmark in 1948 by the renowned J Ring Andersen Shipyard. She was commissioned by the Royal Greenland Trading Company and used to supply remote areas of Greenland until the 1960’s. After this, she became a fisheries support vessel in the Faroe Islands.

However in 1981 her fortunes were changed. Completely re-rigged, she was set for a new career as a sail training vessel, as well as the occasional movie star. Her appearances include the Return to Treasure Island (1986), The Three Musketeers (1993), Amazing Grace (2006) Alice in Wonderland (2010) and Poldark (2016).

Kaskelot provides the perfect backdrop for the appearance of celebrity pirate and star of hit CBeebies programme Swashbuckle, Gemma Hunt, at the Show on Saturday 16 September. She will be helping to kick off all the action on the first weekend, wowing the Show’s youngest visitors with a special pirate song and dance show, meet and greets and autograph signings.

Murray Ellis, Chief Officer of Boat Shows at British Marine, comments: “We know that our visitors love tall ships, always proving hugely popular, and this year we are delighted to be welcoming the tall ship, Kaskelot, to TheYachtMarket.com Southampton Boat Show for the first time. Her presence for the 10 days offers a rare opportunity for visitors to climb onboard and learn about the history of one of the last classic wooden tall ships still in existence, all for free.”