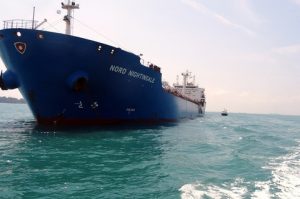 A Military Sealift Command contracted ship diverted from its mission to perform a rescue at sea mission on July 7.

The Thome managed vessel, MT Nord Nightingale, was in transit from Houston, Texas, to Akrotiri, Cyprus, delivering fuel for the U.S. Air Force when it helped rescue two German sailors stranded at sea off the coast of Florida.

“The crew did an excellent job of redirecting their focus and assisting with rescue operations when we received the distress call,” said Capt. Nicolae Gainuse, MT Nord Nightingale master.

“You never set out on a delivery mission thinking you’re going to be rescuing people at sea, but fortunately we were in the right place to provide assistance.”

The distress call was received by the ship at approximately 3.10pm, at which point it called the Maritime Rescue Coordination Centre (MRCC) Miami for additional details.

Gainuse then called Thome’s HSSEQ department and received its full support to proceed with the rescue operation. Less than 20 minutes after the distress call, the crew had changed course and were busy making preparations for the rescue.

“During that time, I was liaising with MRCC Miami to coordinate and confirm helicopter and medical personnel support. We also assigned duties to crew, established lookouts and prepped the ship for the upcoming operation.”

The life raft carrying the two stranded sailors was located around 8pm, and within an hour helicopters were dropping rescue personnel into the water for the recovery.

Once the stranded personnel were aboard, the crew ensured all rescue team members, inflatable boats and military equipment, were brought on board before heading for the Florida coast.

“When we got close enough, helicopters recovered personnel from the ship and began removing the rescue personnel and equipment. We were then able to resume our mission at about 2.00 am,” said Gainuse.

“I can’t speak highly enough about the professionalism of the crew during the long operation. We train for scenarios like this hoping they will never happen but it’s rewarding to see it all come together when it mattered.”

IMCA diving seminar and DMAC workshop to be held