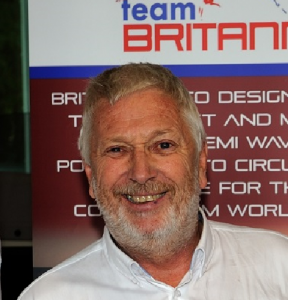 Ocean racing legend and skipper of Team Britannia Alan Priddy has been given the University of Portsmouth’s top honour.

The award, Doctor of Science (honoris causa) was presented to Alan at a spectacular graduation ceremony in Portsmouth’s Guildhall, overseen by TV’s Sandi Toksvig – the Chancellor of the University.

Speaking at the ceremony, Professor Mike Tipton praised Alan as a local boy who has “done good,” and that just reeling off his achievements was “far from the whole story.”

“Alan was born in Portsmouth, he was sailing by eight years of age and in charge of a motorised dinghy by the age of 11,” he said.

“A few years later Alan had become a Mod (not a Rocker) and through the association with scooters, developed a passion for fixing them. This hobby turned into a small business when a friend, Pat Nelson, gave Alan access to a workshop in Fratton, and he started fixing bikes, then cars. At the time he was also acting as a labourer for six bricklayers, so focussing on things mechanical probably wasn’t that hard a choice!

“Alan worked on all aspects of bikes and cars until one day one of his customers advised him to “Do one thing properly.” Alan heeded this advice and concentrated on gear boxes, building the specialist “Express Gearbox Company” which now employs 25 people in Portsmouth, and has customers around the globe.

“But this is a long way from the whole story,” added Professor Tipton. “Alan’s passion for things maritime never faded. He was a big fan of Sir Alec Rose; he followed his adventures and was enthused by them. He was in the flotilla that welcomed Sir Alec home on the 4th July 1968 after his 354 day single-handed circumnavigation of the planet on his boat Lively Lady.  Rose became Alan’s mentor, and his motto “If you believe you can, you can” enthused Alan, whilst Rose’s answer to the question what can go wrong? “You can die,” luckily failed to dampen this enthusiasm.”

In reply, Alan Priddy commented: “I am deeply, deeply honoured and touched by this award.  The University is an important part of our City and preparing young people for the future – so when I first got the letter telling me that I had been proposed to become a doctor, I thought it was a mistake. After all the only test I have ever passed was my driving test! But then I spoke to Professor Tipton and his team and realised they were serious. I was speechless.”

Alan was joined by his family, and crew members for his latest adventure, Team Britannia – the multi-million pound British bid to design and build the fastest and most fuel efficient semi-wave slicing powerboat to circumnavigate the globe.

Team Britannia is a multi-million pound British bid to design and build the fastest and most fuel-efficient semi-wave slicing powerboat to circumnavigate the globe for the much-coveted UIM world record, currently held by the New Zealander Pete Bethune at 60 days 23 hours 49 minutes.

Its revolutionary semi-wave slicing 80ft RIB will slice through the waves, rather than surfing them. The super-efficient boat, the work of esteemed naval architect Professor Bob Cripps has been designed to be both light and incredibly strong. Bob and his design team believe that the revolutionary shape of the boat, a variant of the “fast displacement hull” will reduce fuel consumption by up to 30 per cent and make the 23,000 nautical mile trip smoother and faster.

In addition to the fuel-efficient design, the boat will use a pollution-cutting Water-in-Diesel (WiDE) fuel emulsion to power the two race-tuned Fiat Power Train C13 500, 6 cylinder engines. The boat is being built by the Aluminium Boatbuilding Company near Portsmouth, and they will be fitting the latest navigation and communications equipment from the British marine industry.

Professor Tipton continued: “Amongst his early non-sailing challenges Alan canoed and rowed around the Isle of Wight. He undertook his first challenge in a rigid–hulled inflatable boat (a RIB) in 1990 when he set a record for a journey around Scotland in a 15 foot boat. Several record-breaking journeys followed around Britain (1992), Ireland (1993) and in the Bay of Biscay (1996).

“Alan was second in the 1993 Round Britain RIB challenge, and then in 1997, he attempted the Atlantic Challenge in a 24 foot RIB. The route went from Portsmouth, New Hampshire in the USA to Portsmouth, Hampshire, stopping on the way in Nova Scotia, Newfoundland, Greenland, Iceland and Northern Ireland. Luckily Alan is “fascinated by ice” because he was blocked by it, and found himself in an open boat, 500 miles from safety with 100 miles-worth of fuel on board. He waited five days for an ice-breaker and, 21 days after he set-off, he made it to Portsmouth.

“Further RIB challenges and records followed: London to Monaco in 99 hours and 19 minutes; the Circumnavigation of Britain in five days, six hours and five minutes. In 2002 Alan, Clive Tully and Steve Lloyd attempted to circumnavigate the globe in the custom-built RIB Spirit of Cardiff, one of the largest RIBs in the world at the time with an overall length of 33 feet. But the voyage ran into difficulties and was prematurely concluded when one of the crew suffered heart problems 350 miles from Newfoundland.

“In 2003, Alan attempted to cross from St. John’s, Newfoundland to Cape Wrath in Scotland in less than 100 hours. The Spirit of Cardiff was refurbished and became The Jolly Sailor. A gruelling voyage ensued with the boat being battered by 50 knot winds. Despite this Alan set the fastest transatlantic crossing by a RIB. In 2004, Alan attempted to return the Jolly Sailor to Newfoundland to be used by charitable organisations, but the boat was hit by a large wave, sank and the crew had to be rescued.

“You should now understand at least two things. Firstly, Alan is a man who has known disappointment, but persists in the face of it, a good lesson for life; there is a difference between endurance and the ability to endure.  Secondly, you now know why an expert in sea survival, rather than engineering, is giving this oration.”

Professor Tipton went on to talk about Alan’s work with wounded and injured veterans from the armed forces charity Blesma, who will be joining Team Britannia as they look to shave more than a week off the current world record.

Professor Tipton added: “Having achieved much on the water, if you ask Alan what his proudest moment is he will tell you it is the work he is doing with the charity Blesma, a charity for limbless veterans that includes Team Endeavour. Coincidentally, “endeavour” is probably the word that best describes Alan. It is also a good word for today.”

Alan concluded: “What was particularly pleasing about the award was that I was able to share it with so many young people who have their whole future and careers in front of them, and their families who have supported them through good times and not so good times.

“It was great to see how our City and our University are making such a difference. As the Vice Chancellor said: ‘Be the force for positive change.’ I could not agree more.”

The Environment: an interview with Antipollution’s CEO Byron Vassiliades