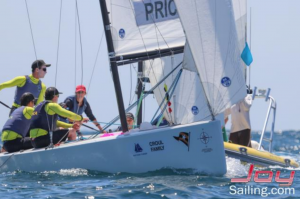 Day three of the Governor’s Cup saw Harry Price (AUS) defeated only once through Flight 18 of the second Round Robin. The standings at the end of day three are as follows: Harry Price (AUS), Cruising Yacht Club of Australia, with 17 wins; Christophe Killian (USA), Balboa Yacht Club, with 15 wins — losing only to Price and Christopher Weis (USA) of Del Rey Yacht Club. Weis is in third with 14 wins, tied with Leonard Takahashi (NZL) of Royal New Zealand Yacht Squadron. Will Boulden (AUS) of Royal Freshwater Bay Yacht Club won 11 matches. The all-girl team led by Clare Costanzo (AUS), of Royal Prince Alfred Yacht Club, rounds out the top six teams.

On Friday, four races will complete the preliminary series to decide competitors in the next stages.

The racers returned to the dock in time to take part in Balboa Yacht Club’s traditional BeerCan Races, held Thursday evenings throughout the summer. Governor’s Cup sailors are given the opportunity to crew on larger sailboats in this friendly series held in Newport Harbor.

Fans, friends and spectators have a number of ways to follow the Governor’s Cup this year. Live pre-race shows start at 1000 (10:00 AM PDT) daily and a post-race show begins at 1700 (5:00 PM PDT) with live streaming of the semi-final and final races starting at 1200 (12:00 (noon PDT) on Friday and Saturday. Live coverage of Friday’s press conference with semi-finalists will be broadcast at 1845 (6:45 PM PDT) Friday, preceding the final press conference after return to the dock Saturday and the trophy presentation. All broadcasts will be available on the BYC Facebook page at www.facebook.com/balboayachtclub