Tour Leaders Trésors de Tahiti In The Chocolates in Roses 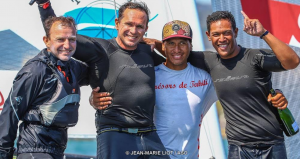 Téva Plichart’s Trésors de Tahiti showed all the traits of potential Tour Voile champions not just in the smooth, assured manner in which they won today’s Act 6 Super Final but also the way in which they managed their route into the final in Roses, Costa Brava.

Remarkably the Tour leaders sailed a complete facsimile of their 2016 Act in Roses. Then they sailed an 11th in the coastal race after an early option went wrong and then won in the Stadium. Act 6 of the 40th Tour proved an exact copy of last year.

The tour leaders once more stayed super consistent over their five qualifying heats on the Bay of Roses. They won just one of their races but qualified second.

But when it counted, in 18kts of brisk Costa Brava sea breeze, Teva Plichart, Pierre Pennec and Manueta Mahahi won the Super Final start and blasted into an early lead which was never challenged. In contrast Team SFS and 2016 champions Lorina Limonade-Golfe du Morbihan both fell foul of Black Flag Disqualifications at the start and had to return early to the Boat Park, both ballasted down by maximum points from the high octane Super Final.

Since Act 2 Fécamp when they missed qualification, Trésors de Tahiti have sailed 4,1,4,1 from the four Super Finals. Today with Team FDJ-Des Pieds et Des Mains finishing sixth of sixth in the Final and Team Oman Sail missing the final, Team SFS and Black Flagged, Trésors de Tahiti extend their cushion at the top of the leaderboard to 13pts.

Ironically there is a certain sense of Roses déjà vu for the Tahiti team. Last year they botched their coastal race but won in the Stadium. Yesterday Plichart and crew were last at the first mark after taking an offshore option and losing out badly. They fought back to cross the finish in 11th and today, like last year, they triumphed in the short course arena. The results are identical to last year when they did the same thing in the coastal race, big, different option same result -11th – prior to winning their first stadium race on the Roses race track this time last year. Plichart is a former youth match racing champion who finished second on the Tour before, Pierre Pennec finished fourth in the Tornado in 2000 sailing with Yann Guichard.

“It is the same thing this time but we are very happy to lead. SFS and Lorina Limonade-Golfe du Morbihan were really pressing at the start. Fondation FDJ Des Pieds et Des Mains got six points and so we have gained five points today. But we had to give it everything. We said to ourselves that is what we had to do. That’s what we did and that is how it worked out.” Smiled a delighted Téva Plichart, “We got good starts in out qualification races and had good tactics.”

In 18-20kts of blustery sea breeze the Roses Super Final was not short on adrenalin. Trésors de Tahiti did not put a foot wrong. Matthieu Souben and crew on Vivacar.fr had an inspired second beat to get up to second while Valentin Bellet’s Beijaflore, with Kiwi Jason Saunders on board, chipped away to take places and make a good third place.

Bellet of Beijaflore remarked: “ We had not reached a Super Final since Fécamp and so today we are very happy with our 3rd place. The start was a bit off the pace but we managed to climb back up. But we kind of ran out of runway. We could have got past Vivacar.fr CEFIM. We love it when the wind is strong.”

Team Oman Sail missed out on the Super Final for the first time since failing to make the cut at Act 1 Dunkirk. This time they seemed to have done enough but were penalised on the second beat of their last race, a port-starboard with Fondation FDJ-Des Pieds et Des Mains who were their nearest challengers for third overall on the leaderboard. The Omani team took their turn but dropped from second to seventh in their final heat, so missing out on qualifying only by one single point. Indeed only one point separated three different crews between fourth and sixth!

Mathieu Richards, Oman Sail’s tactician reported, “It was a very disappointing day for us. We were five points clear of SFS and FDJ going into the last race but we got that penalty. It was for a port-starboard cross which for us was OK. The umpires decided it was not OK. In these boats a penalty turn costs a lot. It is frustrating and disappointing but that is the way it is. We are very focused and motivated to come back in the next Act. We are sailing well even if today we were not quite as good. We were not as smooth. Our speed is good but maybe we were just missing a bit, not as smooth as usual. The wind was a bit tricky.”

Even missing out on the final Team Oman Sail hold solid in third places overall, five points behind Fondation FDJ-Des Pieds et Des Mains and ten points up on Team SFS. The fourth placed team who have scored two double wins have had a disappointing weekend, their mast falling down on the Coastal Race and then being black flagged today.