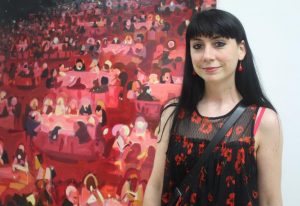 For more than a century, pundits have avowed that contemporary painting has reached the limits of its possibilities, but, to paraphrase Mark Twain, reports of its death are much exaggerated.

An exhibition by members of Contemporary British Painting, a flourishing artist-led group, proves the doubters wrong. It goes under the name of Anything goes? Heaven knows, the question mark is important, for what it celebrates is the dedication of the participants, not the mock social shock of the modern in the 1930s Cole Porter song of that title, which lacked the interrogative symbol. 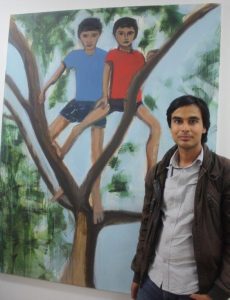 Eclectic is the word for the vibrant collection of contributions from 40 men and women that fills Art Bermondsey Project Space, a non-profit independent London gallery with sponsorship by Tokyo-based optical and camera group Olympus, in association with State art media.

Indeed, the whole reflects an era of individualism. A random glance at the titles of just a few of the works confirms this — Night Sea, Limbs, Rear View Mirror 4, Vermillion Dining Room, Sudden Involuntary Chemical Withdrawal.

The pieces were selected by the dynamo that is Anna McNay, prolific author and critic who muses on contemporary British painting as something complexly personal, defined as much by its breadth and multiple individualities as by any pervading style or theory. 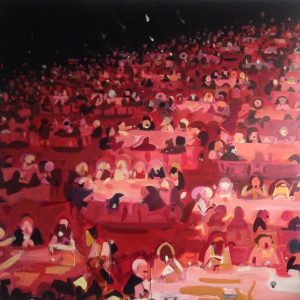 The organisers agree that it is not exactly a question of “anything goes,” but “for now, this is painting as a living example of the real in a time of the unreal.” The show is “a snapshot that seeks to avoid being a snapshot,” Anna writes in the catalogue.

Anna, who is assistant editor for Art Quarterly (Art Fund), and contributes to many publications in the field, has written in State magazine: “Art seems to have been redefined in recent times as some strange mishmash of – anything goes. Did it really all start to go downhill with the birth of conceptualism?” She is dismissive of “incomprehensible art jargon” but loves art for its visceral impact and cognitive impact, so long as it does not demand excessive analysis.

Contemporary British Painting was founded in 2013 by Robert Priseman and Simon Carter, originally with 24 artists, and now with more than 60, turning a regional initiative into a national movement. Membership is by invitation and the group represents “some of the most exciting, emerging and award-winning artists, painting in the UK today.” It sets out “to seek ways to explore and promote current trends in British painting through group exhibitions, talks, publications, art prizes, as well as the donation of paintings to art museums both in the UK and around the world.” 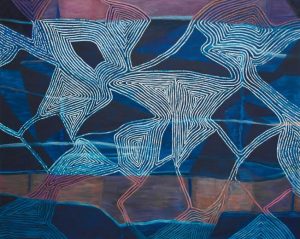 Essex-based Robert Priseman and his wife Ally Seabrook established their Priseman Seabrook Collection which claims to be the only one in the UK dedicated to painting produced after 2000 in Britain. Their impetus for this was that, as they saw it, the new wave of British painters had yet to be collected with the same geographical and chronological focus as their predecessors and foreign contemporaries. More than half of the painters in the collection are women, and it is noted that historically many of the greatest painters who practised in the UK were born abroad. In the 21st century we see this strand of internationalism continuing in British painting, say the collectors.

Each of the coventurers at the Bermondsey show approaches from a fresh angle variously social empathy, disconnect, and disaffection. 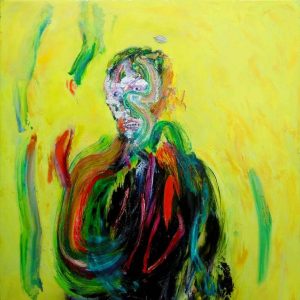 A particularly striking exhibit comes from Susie Hamilton, and it is called Vermillion Dining Room. Much of her work focuses on alienated lone figures in urban or natural wildernesses, but this new acrylic on canvas is one that depicts a dining hall, an “urban wilderness” in its impersonality. For many years, the London painter has drawn attention to people “in the city wastelands of supermarkets, shopping malls, casinos and banqueting halls.” This included a series of rooms with so many diners that you cannot see where it ends. Susie bemoans the lack of relationship between the crowds of lost souls in these “non-places.”

One of the most figurative compositions is by Matthew Krishanu who presents the large format Limbs (oil on canvas) which is part of his Two Boys series, a dozen works depicting him and his brother Richard growing up in Bangladesh, where his parents were Christian missionaries. In an innocent childhood, the young lads look down from trees they have climbed. Partly thanks to the skilful hang of the exhibition, making clever and unobtrusive use of the space and light, this entry looks quite comfortable among the ranks of abstracts. 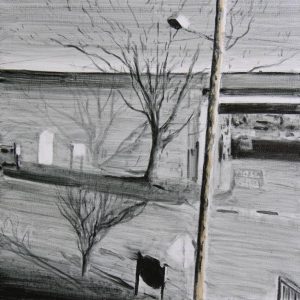 Nor does the other dramatic work of figurative genre, closer to the allegorical category, look out of place. This is Carmen & Luisa (version 2) oil on board, by Wendy Elia. Naked, the two women gaze unflinchingly at the viewer in what is presumably their apartment, their backs to a scene of urban construction, uneasy sky, and snooping CCTV camera.

This is an example of Wendy asserting the inner strength of women, and references to her oeuvre say: “In her portrait work she confronts our voyeurism and asks questions about the female gaze and painting’s relationship to authenticity and illusion. She moves from the personal to the political not only in the range of content and form in the various series, but also within individual paintings, using a range of pictorial symbols and signifiers to extend the meaning and narrative of the work.” 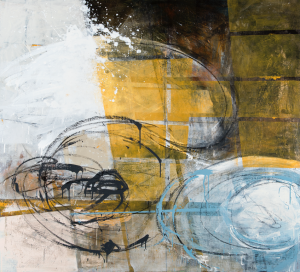 Of more contemplative character is a new offering from Marguerite Horner, who paints in monochrome and was a 54th Venice Biennale exhibitor. By means of what some people perceive as colourlessness, she asks the viewer to curb their quotidian haste. She presents her work in the neutral tones of grisaille, and often the scale is appropriately modest, such as the 30 cm by 30 cm of the work here, a bleak and ‘empty’ suburban scene entitled Touched.

Her message is: “Today the moving image dominates our world [Marguerite’s earlier career was in such a milieu: celebrity photoshoots, advertising and television scene-painting]. and whilst visually powerful in so many respects, it denies us the opportunity for stillness and reflection. The value of a painting lies in its ability to induce a contemplative state in the viewer. As Walter Benjamin says: ‘before it the spectator can abandon himself to his associations.’”

One of the most vivid recent memories for Marguerite began with a visit at Christmas 2014 to the first Calais camp of Asian and African migrants, known as the Jungle, with a group organised by missionary sisters. They went to deliver donations of clothes and food, and returned several times. The camp which became a makeshift town was later demolished and the refugees dispersed around France, while remaining desperate to make their way to Britain for what they saw as a better chance of economic survival, or to be reunited with relatives. 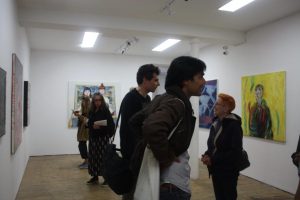 Her images of the Calais encampment, alongside small paintings of perceived moments of introspection, were the subject of a solo show in May 2017 by Marguerite called Keep me Safe. The following month, she was among speakers at a meeting run by a group known as Initiatives of Change on the theme of ‘Migration: a broader perspective in a time of turmoil.’ This was on World Refugee Day’ and her topic was ‘Art and Healing Trauma.’

A stark portrayal of drug dependency, whether prescribed or recreational, comes from Andrew Litten with Sudden Involuntary Chemical Withdrawal. This oil on canvas work with its bright yellow background deals with an important social issue that affects many people. “I wanted the representation of withdrawal to appear as a threatening physical experience of dislocation induced by the altered brain chemistry,” he has written. “The face is snarling with a self-awareness of the ridiculousness of withdrawal syndrome.” 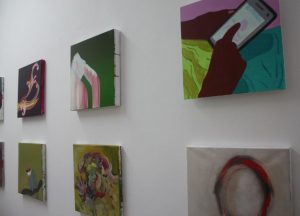 Some of the small-scale works.

In line with other grotesque human heads that have been depicted by largely self-taught Andrew, this is part of the strong humanistic themes of which he treats, such as social alienation, ageing, drug use and other identity disturbance. His desire is “to create emotively-led art that speaks of the love, personal growth, anger, loss and the private confusions we all experience in our lives. Perhaps subversive, tender, malevolent, compassionate – the need to see raw human existence drives it all forwards.”

Referencing night journeys by refugees in dangerous craft is Night Sea, by Freya Purdue, who has a long list of exhibition successes. This oil on canvas work has the spirit of certain paintings by Aborigine artists of Australia, and is meant to bring forth “the sound of night and the relentlessness of the waves.”

Freya describes her paintings as “inhabiting the border between abstraction and figuration” and says that they have “their basis in exploration through seeing and engagement with the tactility of the process.” She adds: “I draw on a wide range of sources from the most obvious classical themes in painting to the subtlety of philosophical and mystical thought.” 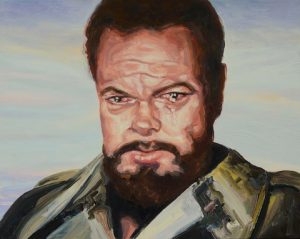 In the Contemporary British Painting Group 2016 catalogue, Freya wrote that “painting today is at its most diverse, possibly more so now than at any other time in history.”

Day Bowman’s study Rear View Mirror 4, which is oil, charcoal and conte on canvas, is one of her road trip series, an energetically set down review of what might be called the new urban picturesque. Her work “lies on the axis of figuration and abstraction,” she says. In the past 15 years, she has collaborated with film-makers, composers and musicians to produce installations in sacred places, market squares and railway stations in many locations in the UK.

Art Bermondsey Project Space thrives by providing what its owners say is “a platform for fresh ideas in visual arts and embracing artists from all cultures.” Three galleries and three floors over 3,000 sq ft on the premises of a former 19th century paper manufacturer make for “one of London’s most dynamic contemporary art spaces.” 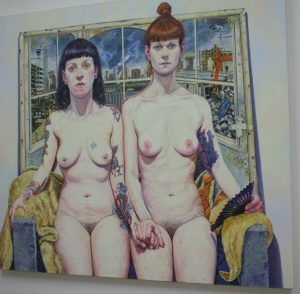 Meanwhile, there is further excitement generated thousands of miles away for several members of the Contemporary British Painting Group. From July 7 until January 10, 2018, 80 of their works are on display in four Chinese museums for the first time. Lent by the Priseman Seabrook Collection, the paintings are being presented by the Yantai Art Museum; Jiangsu arts and crafts museum and Jiangsu art museum at Nanjing; and Tianjin Academy of Fine Art.

The paintings include Into the Wilderness by Marguerite Horner; and Orson, oil on board, by Wendy Elia, who quotes the words of movie director Orson Welles: “We’re born alone, we live alone, we die alone. Only through our love and friendship can we create the illusion for the moment that we’re not alone.” 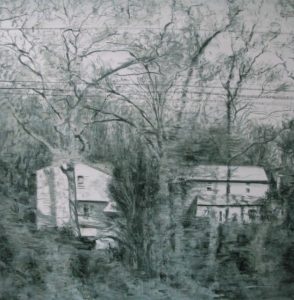 Into the Wilderness. By Marguerite Horner.

Anything Goes? an exhibition by members of Contemporary British Painting, is at Bermondsey Project Space, 183 – 185 Bermondsey Street, London SE1 until August 5, 2017.

lovely to have a great balance of photos of the art and words about the art … rather rare in current art publications .. thanks much