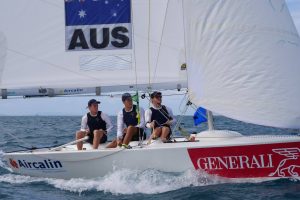 Twelve of the best youth match racers will race out of the Balboa Yacht Club from 31 July to 5 August at the 2017 Youth Match Racing World Championship.

The Championship brings together the best youth match racers from around the world, acknowledging their skills and offering a pathway to senior match racing competition.

In its fourth year, the Youth Match Racing Worlds has provided a pathway for the best young match racers to test themselves against the best in their age group. Joakim Aschenbrenner (DEN) claimed the inaugural title in 2014, followed by Sam Gilmour (AUS) in 2015 and Will Dargaville (AUS) in 2016.

The 2017 Worlds features a record number of participating countries including two skippers from each of the USA, New Zealand, and Australia, and one each from the Great Britain, France, Switzerland, Italy, Sweden and Denmark.

Furthermore, the 2017 edition will welcome two all-female crews with Clare Costanzo leading an Australian team, and Johanna Berqvist heading up a Swedish entry.

Australia’s Harry Price will come into the event tagged as favourite.

The young Australian is World #6 in the World Sailing Open Match Racing Rankings following several exceptional performances at Grade 2 and 3 events over the last 24-months.

Price finished as runner-up at the 2016 Youth Match Racings Worlds in Noumeau, New Caledonia and with experience of racing out of the Balboa Yacht Club, he’ll be gunning for top spot in 2017. Price claimed the honours at the 2015 Governor’s Cup, an International Youth Match Racing Regatta that is the oldest youth match racing event in the world, hosted by Balboa Yacht Club since 1967.

The Governor’s Cup celebrated its 50th Anniversary in July 2016 and in honour of that milestone, the Club’s members and friends funded the design and construction of 12 new “Governor’s Cup 22’s” which will be used at the Youth Match Racing Worlds.

Apart from Price, there are no further returnees from the 2016 Youth Match Racing Worlds.

However, many of the competitors have experience of racing on the waters off Balboa Yacht Club following the 51st edition of the Governor’s Cup that was held earlier this month.

New Zealand’s George Anyon finished eighth, Great Britain’s Matt Whitfield tenth and Charlie Welsh of the USA was 12th. All three will use their experience at the Youth Match Racing Worlds.

Racing will commence on Tuesday 1 August at 12:00 local time. A double round robin, where competitors face each other twice, will commence proceedings.

At the end of the round robin phase, the top four teams will advance to semi-finals with the top two advancing to the final to crown a 2017 World Champion.

Racing will conclude on Saturday 5 August.