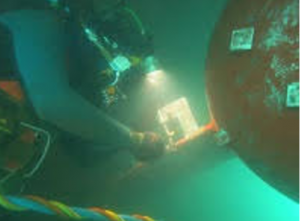 A bow thruster failure can have profound consequences not only for navigational safety but also the shipowner’s operational expenditure, especially if tugboats are required to berth the vessel. But when the vessel is a cruiseship facing disruption to schedules, then the consequences can be severe, denting both the balance sheet and the corporate reputation.

The owner of a 208m cruiseship sailing off the Caribbean was faced with such a dilemma when one of the vessel’s two bow thrusters malfunctioned. A solution was needed that could be carried out on-site without interrupting the vessel’s schedule. 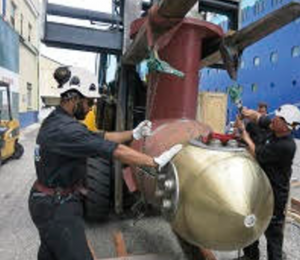 ….and preparing the new unit for installation

The repair was straightforward, but an eight-hour window in various locations added an altogether different dimension, as Hydrex production executive Dave Bleyenberg recounts; “The repair itself was one our teams had done on many occasions, but the ship’s time table was the tricky part. Its cruise itinerary included several short port-stays so we had to devise an effective repair plan that would allow us to the carry out the thruster replacement in eight-hour stages, across several different ports. It was a logistical challenge.”

No sooner had the cruiseship berthed alongside, Hydrex divers set about removing the bow thruster unit and blades in the wet, ensuring everything was watertight before the vessel made way to her next port of call, where the new bow thruster would be installed.

“By the time the vessel had arrived at port, our mobdock team had also arrived and swiftly got to work erecting the flexible habitat in-situ, closing off the thruster tunnel. This part of the repair can only be carried out in a clean, dry environment to avoid water ingress to the new thruster unit,” says Bleyenberg

The Hydrex-designed mobdock technology differs from other rigid underwater habitats, providing a more lightweight, flexible structure that can be rapidly deployed and erected.  Hydrex has been using the technology to expedite a wide range of underwater repair or maintenance work for over twenty years.

The mobdock and our underwater repair know-how saves shipowners considerable time and money,” says Bleyenberg. “I can’t imagine the financial losses incurred should a vessel have to cancel its itinerary, but we completed that job across multiple sites in just eight hours…and the passengers were none the wiser.”