Changing of the Guard in 49er – A Tough Bet to Place 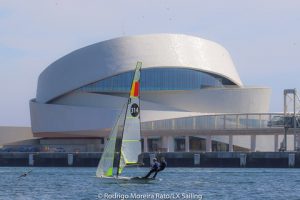 will not be any of Iker Martinez/ Xabi Fernandez, Nathan Outteridge/ Iain Jensen, or Peter Burling/ Blair Tuke. It is a testament to the strength of the 49er Class that each of these three champions are now leading top professional sailing programs in the Americas Cup and Volvo Ocean Race. No doubt the new 2017 49er Class World Champion will be looking to follow in their footsteps.

The truth right now in this post Burling and Outteridge era is that there is so much parity in the fleet making predictions right now is harder than it’s ever been. Up to 60 teams are competitive enough that they are looking to make it through the qualifying series to the top 20 Gold fleet. Of those teams, more than 15 believe that if things go their way they could be World Champions at the end of this week. This World Championship is set up to have 19 races over 6 days, but with many of the points being scored in the Gold fleet and Final day races, it is likely to go all the way to the wire and be a tight finish.

For the first time 49er and general sporting fans will be able to wager on the outcome so place your bets if you believe you can predict the results and our new World Champion. **