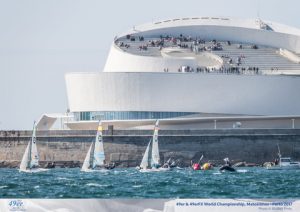 Matasinhos, Portugal (2 September 2017) – Another day meant another obstacle from mother nature at the 2017 International 49er and FX World Championship, where an unstable land breeze teased the gold medal fleets this morning for their 10 AM start.  Both the men’s 49er and the women’s FX skiff started races in 6-10 knots of Easterly breeze, only to see the wind shut off completely as they headed to their respected finish lines.

Some of the 140 teams from 27 nations were jumpy with anticipation and all enjoyed the warm summer Portuguese sun as they waited on the water for the forecast Northerly to fill in, and after nearly 2 and a half hours, it filled quickly. 8 knots became 12 became 16 gusting near 20 knots, allowing the men’s 49er fleet to pick up four more races and complete their championship.  The women’s FX fleet sailed two races before heading back to shore, and with the race deadline drifting close, officials sent the top ten teams out to the medal racing course – a tight, intense racetrack putting boathandling and boat-on-boat tactics at a premium for thousands of beachgoers just meters from the action and tens of thousands more watching online.