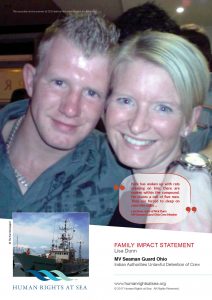 Human Rights at Sea continues to support the case of the crew of the MV Seaman Guard Ohio, including the British maritime security guards who were detained on 12th October 2013 in the Indian Port of Tuticorin for possession of illegal arms and environmental pollution. Indian authorities subsequently arrested the six British nationals, three Ukrainians, fourteen Estonians as well as twelve Indians. The vessel was owned by the AdvanFort Company who stopped paying the crew salaries in November 2013.

The six British guards have now been imprisoned in the notorious Chennai Puzhal prison for two years of a five year sentence, having been deprived of their liberty for four years so far.

Human Rights at Sea, alongside Whittaker & Co and Global Maritime Recruitment Solutions has funded a new awareness film to assure the continuing and accurate recording of the true narrative in this tragic case.

The charity has further published a detailed ‘Family Impact Statement’ within its Case Studies on-line area outlining the impact on one of the families authored by Lisa Dunn, sister of Nick Dunn. Her statement is compelling reading and brings the case alive on a human basis as to the consequences of the failure to support crew members arrested in foreign jurisdictions without proper insurance provisions, owner and legal support. 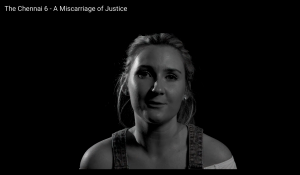 Lisa said on behalf of the families: “We hope by releasing this video more people will have a greater understanding of this huge injustice that the men are experiencing and the effect it has on their families and in particular their children. We urge everybody to get behind us and use people power to help bring our men home.”

Jordan Wylie, the driving force behind the awareness film commented: “The case of the Chennai 6 and the crew of the Seaman Guard Ohio is an absolute travesty and one of the biggest miscarriages of justice the maritime world has ever seen. We can only hope that through maximum awareness projects such as this new video that someone somewhere will intervene with a common-sense approach and allow these veterans to return to their families and loved ones. I would like to thank Human Rights at Sea for their continued efforts on making sure these men are not forgotten and also their financial support towards the ongoing awareness campaign along with Whittaker & Co, Global Maritime Recruitment Solutions and Standby Productions.”

The film can be viewed on the Human Rights at Sea home page and at: https://www.youtube.com/watch?time_continue=2&v=miofrRlooTI

The Family Impact Statement can be downloaded from the charity’s Case Studies section: https://www.humanrightsatsea.org/wp-content/uploads/2017/09/HRAS-Chennai-6-FIS-lisa-Dunn-SECURED.pdf

Football in the service of Humanity