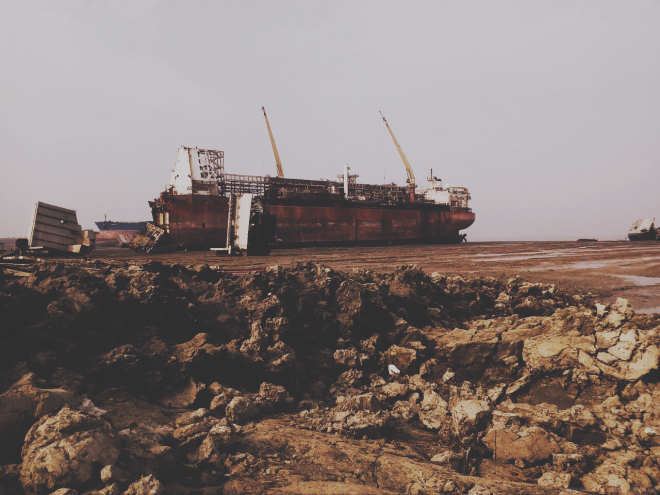 Brussels, 13 September 2017 – 16 August of last year the FPSO NORTH SEA PRODUCER was beached in Chittagong, Bangladesh. The ship was allowed to leave the UK based on the false promise that it would be further operationally used in the Tin Can port in Nigeria. One year on, the battle to hold the owners and cash buyers accountable for the illegal export of the FPSO is not over.

The North Sea Producer (ex Dagmar Maersk) was deployed in the McCulloch field in the North Sea, transporting and extracting oil from the UK continental shelf for 17 years, and was owned by the North Sea Production Company, a single-ship joint venture between the Danish A.P. Moeller Maersk and the Brazilian Odebrecht. Once the field closed, the NORTH SEA PRODUCER was laid up in Teesport for a year while the owners were looking for buyers. For scrapping purposes the ship was only allowed to be sold to a facility within the OECD as any export of hazardous waste outside the OECD is in breach of International and EU law. However, selling the FPSO to a recycler that could safely handle all the hazards of the ship within the OECD would have meant that the owners would not have made as big a profit as selling it to less scrupulous breakers operating on tidal beaches in South Asia. Maersk and Odebrecht thus settled to sell the ship to the largest vessels’ scrap dealer, cash buyer GMS, through a St. Kitts and Nevis post box company called Conquistador Shipping Corporation, and provided the UK authorities with a false contract stating that the NORTH SEA PRODUCER had found a new owner who would operate the ship in Nigeria.

Despite the vessel being under the radar of local communities in Teesside and was well-known in the shipping industry for needing to be scrapped, the UK authorities relied on the false contract to allow the FPSO to leave on tug. The NORTH SEA PRODUCER was then directly towed all the way from the UK, around the African continent, to Bangladesh. NGOs were quick to alert both the UK and Bangladesh governments of the illegal export [1]. It was only once the FPSO had left the UK – and after the case was strongly criticised in Danish and international press – that Maersk was “very, very sorry” that Conquistador Shipping Corporation apparently took the independent decision to beach the NORTH SEA PRODUCER in Chittagong for dirty and dangerous scrapping. Maersk has since claimed in its Sustainability Report 2016 that it has cut all commercial ties with the buyer of the NORTH SEA PRODUCER: an obviously meaningless statement if that implies cutting ties with a single-ship post box company. Maersk however still refuses to admit that they sold the ship to GMS, the largest waste traffickers in end-of-life ships, as doing so would clearly indicate that they knew all along that the ship would directly head to a scrap yard. It was evident that the bungalow in St Kitts and Nevis, where Conquistador Shipping Corporation was just the shell company set up by GMS to make it look like it was sold to a legitimate buyer, would not further operate the FPSO. Or was Maersk fooled by the tricks of the trade? Did they really believe that the ship would continue to operate under the ownership of the world’s largest scrap dealer? Chances are they were not fooled at all, but were in fact orchestrators of an illegal export alongside GMS.

Once the ship arrived at Janata Steel in Chittagong, and upon alerts issued by local NGOs, the Bangladesh Attorney General of the Department of Environment set up a special committee to determine the presence of contaminated residues, and to investigate the ship’s illegal import due to lack of necessary clearances and false claims that it was hazardous-free. Having operated in the North Sea, the vessel’s pipelines are likely to contain residues contaminated by radioactive materials and sulphur. Other toxics, such as asbestos and heavy metals, are contained within the structure and paints of the ship. Upon a request from the Platform’s member organisation Bangladesh Environmental Lawyers’ Association (BELA), the report on the ship’s condition was released in June: it’s conclusion was that radioactive residues were found upon inspection and that further surveys needed to be carried out on the whole ship. BELA subsequently succeeded in getting an injunction on the breaking of the NORTH SEA PRODUCER until October, which is when the Court will resume the case after the Eid recess.

In the UK, the Platform demanded the Secretary of State for Environment, Andrea Leadsom, to investigate the illegal export from Teesport [2]. DEFRA has been looking into the case for nine months now, and the Platform recently requested that they share information on their findings and on the action which they will be taking against the fraudulent and illegal export. In parallel Danish parliamentarians have been questioning the Environment Minister, Esben Lunde Larsen, on what actions Denmark can take to hold Maersk accountable.

One year on since the beaching of the NORTH SEA PRODUCER, the story is thus far from over. One year on and there are legal proceedings in the exporting state, the UK, and the importing state, Bangladesh, to hold Maersk, Odebrecht, GMS and the importers accountable for their illegal trade of a highly toxic and particularly risky ship to dismantle.

Small boats in military service can now be certified under a single code, reducing complexity and confusion