Can Shipping Ever be Fair?

Can Shipping Ever Be Fair?

by Steven Jones, Partner at McWatt and Jones

At the International Seafarers Welfare Assistance Network (ISWAN) www.seafarerswelfare.org #LISW2017 breakfast, there was one question which caused more debate than any other. That was whether there can ever be a concept of “fair shipping”.

In a world which increasingly seems inherently unfair, how can seafarers be protected, and companies encouraged to do the right thing? The Maritime Labour Convention (MLC) was meant to change everything. No longer could owners abandon their crews, there was a safety net and it would mean that everything would always turn out alright.

Alas, bad owners are still doing terrible things, and we seem as far away from fair today as we ever have. According to data from the International Labour Organization (ILO), over the last five years, 12 to 19 crew abandonment incidents were reported annually and 1,013 seafarers have been left stranded by owners. 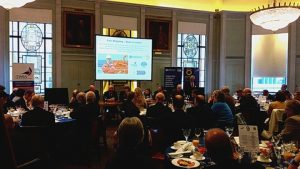 From the ISWAN event at Trinity House during LISW 2017

Furthermore, figures from this year, as of July 31, show that 28 abandonment cases were reported, involving 339 seafarers. Of those 1,352 seafarers, 254 seafarers were from Ukraine, followed by India with 203 and the Philippines with 105 seafarers, rendering these nationalities among the most vulnerable categories of sailors when it comes to crew abandonment.

The number of cases reported has increased drastically of late, something which appears to be down to greater awareness of the database or perhaps due to the publicity that has been given to the database at IMO meetings and events. Increasing interest in abandonment cases by the related stakeholders as well as by seafarers themselves have resulted in the higher number of cases being reported. Which can only be a good thing.

The ILO database is the go to source on abandonments, but despite the improvements and an increase in reports, it still seems to lack many “abandonments” which are reported in the media. Of course, if a shipowner fails to make arrangements for, or to meet the cost of seafarers’ repatriation, the “competent authority” of the IMO member whose flag the ship flies is in charge of arranging for repatriation.

Anything which involves flag States and nations is going to be drawn out. Alas, many cases have not been resolved for months and even years. Until each case is resolved, seafarers need due assistance to maintain their lives on board the ship. When they are not able to get very basic provisions such as fresh water, food, medical care and fuel, every case can become the worst case. Which all sounds very, very far from fair.

Abandoned seafarers are often reluctant to leave their ship until it was sold in a judicial sale to pay outstanding claims, including claims for unpaid wages. It is hoped that the new system and the payment of such claims will be expedited, and this may reduce the number of prolonged abandonment cases.

In theory the system can work, but there are gaps and problems which still remain. It is too easy for flag States to skirt or shirk their responsibilities. Those States yet to ratify MLC are proving a real thorn in the side of the legislation. Despite a no favourable treatment clause, it seems they are driving a ship though the letter and spirit of the convention.

Alas, incredible as it seems there are still flags which exist to facilitate the machinations of sub-standard shipowners. For all the progress, there is a healthy maritime market in companies seeking to play the system, and they all too often succeed. With the rather depressing backdrop of the less savoury side of shipping, in essence it all comes back to protection and the ease by which financial support can be accessed.

One of the problems within shipping has been the failure to really tackle bad employers head on. As we have heard, the ILO database has had issues and has often been far behind the curve.

Then there is the fact that shipping companies are often incredibly litigious. One slipped mention of a vessel or company name, and threatening emails from lawyers will be pinged in very quick order. That means that there is often a hesitancy to get involve. Yes, the charities and unions do a sterling job, but it often descends into a slanging match when owners are outed for their failings.

There are campaigns to get “Fair Transport” recognised, and to have shipping as part of this equation. However, those seeking to promote the concept seem to be having to battle far harder than you might ever expect. It seems all is not very often fair in shipping.

Again (that word again), the blockchain, could be the answer. If MLC provisions and indeed the happiness and welfare of seafarers are part of the data algorithm, then charterers will have no option but to find the highest common denominator, instead of scrabbling around to find the lowest, at the cheapest price. Now that really would seem fair.

Seafarer Happiness Is Key to Success