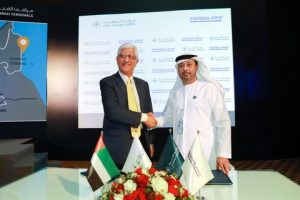 Fujairah Terminals welcomes Emirates Hana, largest container vessel to call at the port with a capacity of 5,500 TEU’s

The announcement came following an official event held at Novotel Fujairah, attended by Sheikh Saleh bin Mohammed Al Sharqi, Chairman of the Board of Port of Fujairah, Captain Mohamed Juma Al Shamisi, CEO of Abu Dhabi Ports, along with a delegation of Senior Managers, Key Stakeholders and Customers. 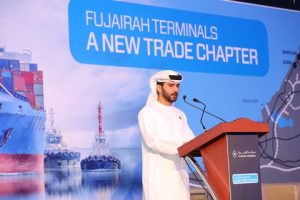 Earlier this year, Abu Dhabi Ports signed a 35-year concession agreement with the Port of Fujairah, under which “Fujairah Terminals”, a new operational arm wholly owned by Abu Dhabi Ports, was established with over AED 1 billion ear-marked for investment in in equipment, and infra and super structure.

Commenting on this major milestone occasion, Captain Al Shamisi said: “As we mark the official commencement of commercial operations, we express our pride, clear commitment and intention to bring the full breadth of our experience to the table; whether it is container, RORO, bulk, cargo or cruise, supporting expansion into the Indian sub-continent and East African markets, which is set to accelerate the economic and social development of the emirate, eventually becoming a strategic and vital artery for international trade.”

“The strong partnership has set in stone, strategic and robust plans, in line with our wise leadership’s vision to create a sustainable and diversified economy for future generations to benefit from, that promise a bright future for Fujairah, its community and businesses.” He added. 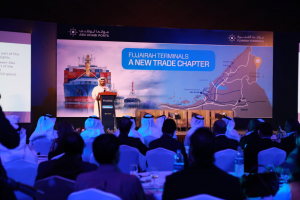 Mr. Abdul Kareem Al Masabi, Executive Vice President-Ports at Abu Dhabi Ports said: “We are here because our ambition is to replicate the same growth we have experienced and driven at Khalifa and Zayed Ports to Fujairah Terminals. The Port is already one of the most important economic and commercial ports operating in the UAE and we are confident we are soon to witness a significant growth in the Port of Fujairah, in addition to a boost to vital industry sectors such as steel”.

Captain Mousa Murad, General Manager of Port of Fujairah, said: “The opening of Fujairah Terminals today, is the culmination of the concession agreement, which included the development of the ports infrastructure, in addition to the establishment of a new container terminal at Fujairah Port with deep berths, allowing larger vessels to enter the port. The Port will also be equipped with new and advanced equipment as well as the latest IT systems in line with the highest standards of precision, safety and speed”. 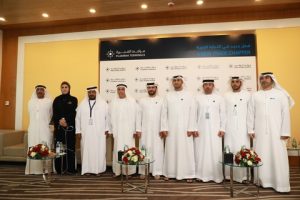 Since the concession agreement, Fujairah Terminals has witnessed several successes already. On the side-lines of the event that signalled the start of operations, it was announced that Perma Pipe Middle East, a renowned manufacturer of pre-insulated piping and leak detection systems for district heating and cooling, signed an MOU with Fujairah Terminals with the aim of receiving all the necessary logistics support from the terminal facility to streamline their business.

Fathi Elgendy, Senior Vice President Middle East and Africa at Perma Pipe Middle East commented on the MoU saying: “Our decision to invest in our relationship with Fujairah Terminals is motivated based on multiple business factors that will gain us a competitive advantage. By choosing to utilise the port in Fujairah for our logistics we will be benefitting from increased time efficiency, cost reduction and a convenient location only 2 kilometres from our offices. Moreover, we are eager to reciprocate the support Fujairah has shown us over the years for our operations in the region and play our part in this new era of economic activity and development.”

In addition, this August, Fujairah Terminals celebrated its first vessel call under Abu Dhabi Ports management. The company also welcomed, a day before the event, the largest container vessel to call at the port, the Emirates Hana, which is capable of handling 5,500 TEUs and arrived in Fujairah on 19 September.

Through ‘Fujairah Terminals’, Abu Dhabi Ports is granted the exclusivity to enhance existing infra and super structure; in addition to managing all Container, General Cargo, RoRo and Cruise Ships in the Port. It further extends this exclusivity throughout the emirate of Fujairah for Container business. The agreement also includes deepening of berths to enable the Port, which already serves clients and companies in the entire Gulf Region, Indian Ocean and Indian Subcontinent, to cater to larger vessels.

Abu Dhabi Ports will be investing in the infrastructure of Fujairah Ports, further enhancing its capabilities. Development includes deepening of berths to -16.5 metres to allow bigger vessels to come to the Port of Fujairah, building an approximate 300,000 sqm yard of storage space, as well as an additional 1km quay to accommodate the expected growth in the number of ships arriving to the port, increasing shipping operations in the process.

Abu Dhabi Ports will also work on equipping Fujairah Ports with new and advanced equipment such as STS post panama quay cranes, RTG’s as well as new IT systems, bringing efficiency to operations and better equipping it to meet the needs of global shipping companies and service operators in line with the highest international standards. Maqta Gateway, a wholly owned subsidiary of Abu Dhabi Ports will be engaged to develop a Port Community System that links port communities with various departments, facilities and operations.

The development of berths and yards is scheduled to commence in 2018. The port will remain operational during this time to service existing and new clients. Additional capacity and new quay cranes will begin operations in 2020, including the post panama quay cranes.