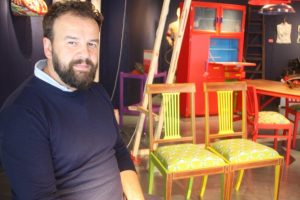 From the Fall of Man to the modern fate of migrants traversing the seas, this installation highlighted as much as any the vast scope of subject matter under the wing of London Design Festival 2017.

A collaboration of seven artists explored the theme of Paradise Lost as the concept of creation and a laboratory of design.

They spread their composition over two spacious floors in retail premises in Church Street – a Marylebone hub known for its vibrant market, antiques emporia, shops many of which sell Middle Eastern produce, cafés and restaurants – announcing the title as The Lost Heaven. 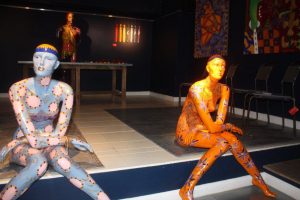 This took on board the 350th anniversary of what was originally called Paradise lost, A Poem in Tenne Bookes by John Milton (1608–1674).

That epic poem—the 10 books encompassed more than 10,000 lines of verse – rehearsed sweeping Biblical lore, focused on the destiny of mankind as God and Satan struggle in heaven, hell, and earth, and including the temptation of Adam and Eve.

The coalition of artists turned their skills to intertwining the contents of their studios with a mysterious underworld of dark and light, with the consequence that the works were showcased individually and harmonised at the same time.

In doing so, they exploited eternal narratives treated by Milton that provoke deep reflection about his world and ours. It was an echo of the grand purpose of the London Design Festival (September 16 to 24) to embrace design in its broadest sense, from chic interior décor to craft and to global outreach among more than 420 events and projects. 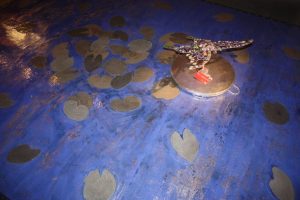 Reprising the powerful impact on Western culture exercised by the blank verse of Paradise Lost, the exhibition sought to address fundamental questions of modern society. London-based architect Gaetano Borrelli, who co-ordinated the installation, gave his fellow artists free rein to range over their chosen aspects, always emphasising: “we celebrate diversity.”

Gaetano runs GBA & D, a new architectural practice chartered by the Royal Institute of British Architects. He said: “We did not at first plan to design an installation on a biblical epic. It just came to us…” and he quotes Milton: “Is this the region, this the soil, the clime/ That we must change for heav’n?”

In Church Street, the aim was to “design a room” in which “to view, to dream, to read, to breathe, to feel, to find, to get art.” As Milton averred: “The mind is its own place and in itself/Can make a heaven of hell, a hell of heaven.” 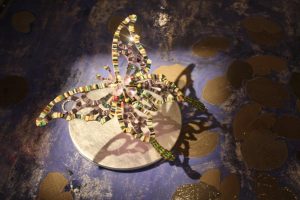 Gaetano lent to the project his expertise which includes recreating vintage and retro chairs and other furniture as pieces of art. His broader design background includes buildings and facilities for healthcare, leisure, education, high-end residential and commercial needs.

He was born and brought up in Apulia, the southern region of Italy which has intimate links to the sea. He studied as an architect in Rome where he worked and lived for 14 years, later moving to London, where his business offers “full architectural and interior design services from conception to completion” including “every fitted element within the building” – lighting, joinery, stairs, wardrobes, lamps, chairs, desks, tables, sofas, armchairs and more.

In an overview of the exhibition, Gaetano and his colleagues insist that “Paradise Lost is the conscious price we pay for modernity, the myth to justify a ruinous lifestyle blind to Nature, her rules and necessity.”

The motif of exodus is taken up by self-taught painter Franco Nonnis, who lives and works in Cagliari, in the light of the growing number of refugees from Algeria and elsewhere arriving on the shores of Sardinia. They appear in his output which includes harlequinesque mannequins of sad and disturbing mien. 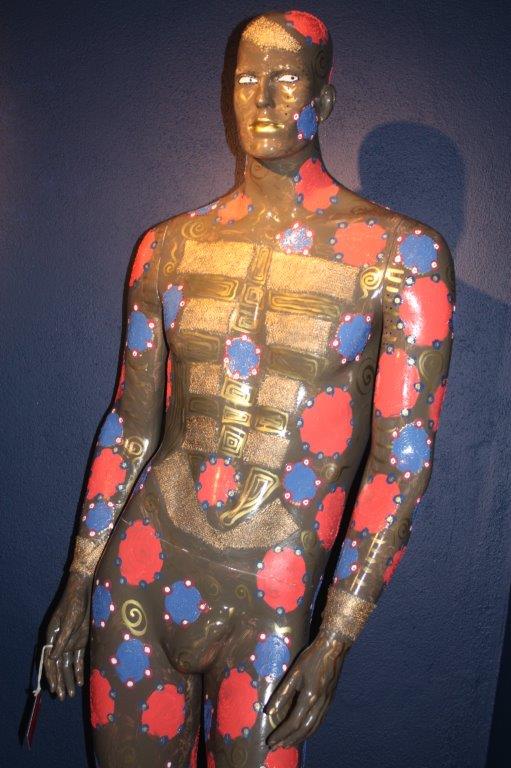 It has been reported that from January to mid-September 2017, more than 800 Algerians made the perilous overnight crossing from Algeria, following the 1,100 who landed during 2016.

Franco said that the sadness of those African people prevents us from seeing the stories that they carry with them over the sea, in bags full of rags and memories. Those bags are the emblem of their escape from hunger and wars, and the cruel emblem of women, children, and desperate men seeking shelter for their families, and of dead men and women lost at sea in a new phenomenon in recent history.

“My conscience comes out devastated,” said Franco, adding: “While all this was happening, another tragedy took place, quieter, less mass-media-appealing, less spectacular perhaps: the escape of Italians from Italy. The escape of young and old people looking for a job and dignity, looking for a future considered by many no longer possible in our country. Guided by the spasmodic search for social values to share, to convey to their children. It is the story of people who have lost their Paradise, it is the story of a people going away to look for another one.”

Horrors unknown to the generation of anyone of less than 50 years of age have emerged. Wars, terrorism, whole-population migrations, economic crisis: “all these are elements of the denial of a future that breaks the dream of most people. The search for new opportunities is spasmodic, long and difficult.”

He feels feel pride in and gratitude to those who have overcome the difficulties, “and I find those men and women strong, honest, and innovative… people that have been able to build their own Paradise with devotion, without presumption. I want to find this Lost Paradise, this value of know-how in order to look forward with determination, overcoming the obstacles that life inevitably presents.” 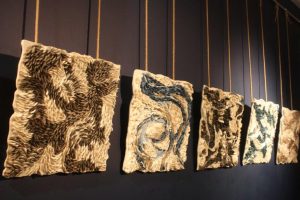 Franco’s participation in The Lost Heaven is the evolution of Exodus, his first exhibition. “The characters represented by the artworks are real, everyone has lived an ‘exodus’ and worked on the construction or discovery of their Lost Heaven. They are people who live close to me, with whom I have shared significant moments of my life and to whom I want to give the richness of the colours and the power of the materials I use, which together express strong values.”

Ruggiero Sardano created a carpet of “sea” from resins as part of a section symbolising freedom, which also featured a modelled butterfly, an insect which enjoys but brief liberty, floating on the waves He was born in Andria, a small town of Apulia, where he continues to live and to work in the decorative artistic field. Over the years, his passion developed for interior decorating: home accessories, furnishings, interior walls and floors. 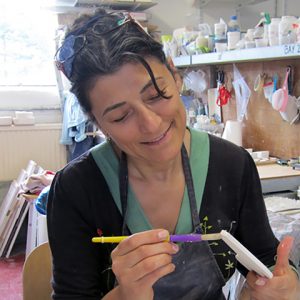 Ruggiero has been among the first in his part of the world to use resins in a certain way to produce rugs and canvases, going on to apply the technique to decorate furniture, lamps and walls. Besides resins, he turns his hand to cement, stucco, lime and more.

Distinctive sculptural ceramic pieces celebrating the themes of existence, self and identity were the input from Belgin Bozsahin, who was born and brought up in Istanbul and has lived in London for most of her artistic life. She says: “I look for what is most alike between us as opposed to differences because I feel this is where we meet most easily. My work is about giving voice to this inner unity and indicating that the visible outer shell, with courage and clarity, can be penetrated. I aim to achieve a sense of hope and beauty that is common to us all. I want to touch the human heart. All my work takes inspiration from the body and soul. I find I am constantly searching for a language that our senses, our hearts recognise.”

She showed hand-formed porcelain pieces suspended individually in such a way that they promote the feeling of mobility; and hand-formed, abstract wall pieces with tactile layers and textures seeking to give “a sense of sight into hidden space” on surfaces.” Such works convey that objects are not perfectly smooth, spotless or still, but about tension. 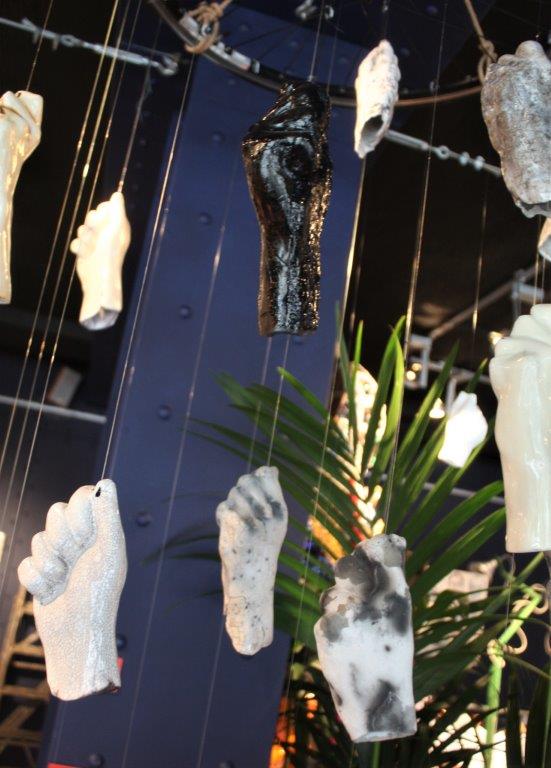 During her career, Belgin has exhibited in cities including Istanbul, London and Bergen, and on the QE2 ocean liner.

Roberto Zizza works in Giovinazzo, a town on the Adriatic coast of Apulia. Some years after training in architecture he was attracted to fashioning mosaic, applying Bim technology (building information modelling, which is a digital representation of physical and functional characteristics) to his artistic projects. He favours Byzantine mosaic technique, transforming styles traditionally used for floors and walls, to home accessories such as lamps, frames, coffee tables, vases and animal figures.

Antonio Murgia takes inspiration from pop art, filling his colourful, vibrant representations of faces with romantic, expressive intensity. A native of Sardinia, he studied at Accademia di Belle Arti di Brera, Milan, and has exhibited in galleries in Asia and many Italian cities,

For Marcello Simeone, there is a musical feel to the artistic work he processes, as a sort of continuation of his piano studies at age seven and which matured at the conservatory.

His themes are those of roots and migration, of freedom and misery, of the old and the new (the latter always struggling to make its way), of life ever more complex and contradictory. “In this perspective, the connection to the land where I was born, Sardinia, takes on an important role. An island that is a borderland between different worlds, different cultures, different peoples. And I watch the metamorphosis in its effort to project itself into the future, although being still hostage to a past that has left its mark on the social and economic fabric.” 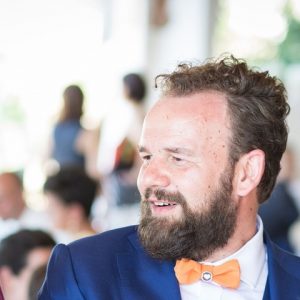 “I like tangling materials, concepts and languages, stacking them and transfiguring them to clothe them with new meanings. Composing images using elements that clash is the thing that interests me most. I mainly use Sardinian wool, either carded, spun or in the form of felt.”

In addition, he uses “anything I happen to have in my hands and that is capable of evoking a story, an experience, a suggestion. Glass, plastic, metal, wood, polystyrene and resins, are some of the materials present in my works.” Where possible, these are “recycled and come from 0 km of distance.”

Ekol opens a new block train between Belgium and Italy