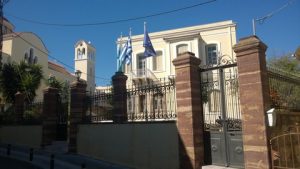 It looks like the title of a new novel where the prince of the seas – son of Poseidon – was the protagonist of an adventure in this beautiful Greek island, but not. We´re talking about other Triton: The principal character of children’s books collection on maritime themes (and the new cartoon: https://www.youtube.com/watch?v=X5zRufAJd0M&t=4s ) which has been presented today in the famous island, characterized by its close ties to the maritime business.

In fact, the author of the Triton collection, Horacio Guillermo Vázquez Rivarola[1], has especially included Chios, in the international launch of the fourth book of the collection. To do so, after a trip to Georgia in the Black Sea, and before the presentation in the Netherlands (WISTA International Conference, Rotterdam) and Spain, he traveled to Chios to meet with authorities of the Maritime  Faculty of the Aegean University, the Maritime Museum and of the “María Tsakos” Foundation. The aim is to offer the possibility of making an exclusive edition of Triton translated into Greek. 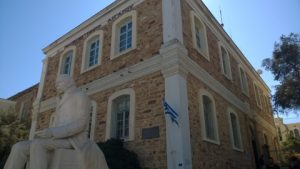 The collection, which was born in 2013, has already published four books, a cartoon and a children’s book, have the purpose to create maritime awareness into childhood. It has been presented at IMO headquarters in London and in many maritime organizations and cities around Planet Ocean such as Liverpool and Southampton (UK), Lima (Peru), Limassol (Cyprus), Athens, Piraeus and Chios (Greece), Dubai (UAE), Madrid, La Coruña, Pontevedra and Santiago de Compostela (Spain), Istanbul (Turkey) and Argentina itself (Buenos Aires, Mar del Plata, Pinamar). 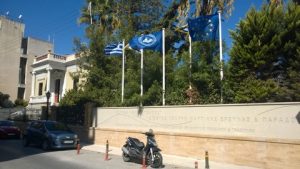 The challenge is: Make a Greek edition for school children from all over Greece. It would be like returning to the source… The protagonist who gives name to the collection is a fun tugboat bearing the name of the mythical Greek god: Triton.