This Year’s Innovation in Safety Award Goes to …. Hapag Lloyd 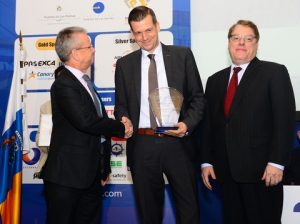 The TT Club Innovation in Safety Award was presented earlier this week to Ken Rohlmann who heads Hapag Lloyd’s Cargo Patrol Team.  The initiative is an industry-leading attempt to reduce fraudulent cargo declarations that obscure the true identity of dangerous goods transported around the globe

The TT Club Innovation in Safety Award is now in its second year and the winner was announced at ICHCA’s 65thAnniversary Conference in Las Palmas this week.  The Award is aimed at identifying innovative developments that engender greater safety and efficiency in the intermodal supply chain. Following the inauguration of the award last year, TT Club and ICHCA have been delighted with the response of the industry, which resulted this year in some twenty-two high quality entries, each revealing exciting and proven improvements to supply chain practices. 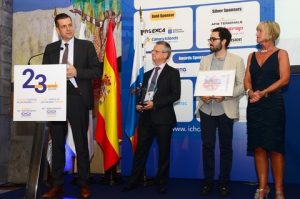 In introducing the award, international freight insurer TT Club’s Risk Management Director Peregrine Storrs-Fox commented, “One of the more serious issues that continues to blight the entire shipping industry is non-compliance in relation to the transport of restricted commodities and dangerous goods. It is estimated that this is the root cause of a major shipboard fire, on average every 60 days. All shipping lines have attempted to mitigate the problem but Hapag-Lloyd has long been at the forefront, creating in 2011 what has become the ‘Cargo Patrol’ search engine.”

Indeed the value of Cargo Patrol has grown year on year and now identifies in the order of 1,250 potential undeclared or misdeclared bookings each day. During 2016, the total of 264,000 alerts resulted in 4,200 positive ‘hits’ – many of these bookings were subsequently cancelled by the line.  As this often results in the ‘problem’ cargo moving on to another line, Hapag-Lloyd has taken the decision to pass its software to IBM for further development and in order to make the solution accessible to all shipping lines. 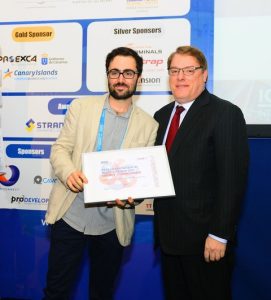 In accepting the award, Ken Rohlmann said, “Hapag-Lloyd is delighted to receive this prestigious Innovation in Safety Award. I’d like to dedicate the award to my colleagues from the Hapag-Lloyd IT department, who built Cargo Patrol as an in-house solution, and of course to my Cargo Patrol Team, who tirelessly investigate all the potential misdeclarations day by day. This award will further motivate us in the work to keep our crews safe.”

The judging process was rigorous and intense, as the range of entries displayed both a great  diversity of safety issues, as well as tremendous passion, effort and ingenuity.  The task of evaluating the entries was, for the five judges (listed below) therefore a formidable one; so much so, in fact that they chose to also award a Highly Commended honour. This went to Safety Ammo.

The dangers faced by ‘pinning’ workers – those who physically handle twistlocks on the underside of containers on the waterfront – are considerable.  Safety Ammo is a RFID-based safety solution that brings together practical operational expertise within a range of technologies and requires minimal user interaction. It monitors in real time any personnel within the safe zone and indicates all activity through a simple interface. The result is that the ‘pinning station’ can notify any external control systems of workers’ whereabouts, thereby significantly increasing the safety of those exposed.

ICHCA International’s Captain Richard Brough thanked Joseph Westwood Booth, the IMO’s Senior Deputy Director, Maritime Safety, who presented the award and also commented, “ICHCA is proud of the level on safety initiatives that the award has encouraged and would like to thank TT Club for its help in administering the awards process and financial support through its continued sponsorship.”