Maritime Cyprus 2017: Highlights from speeches and panel sessions on the third day 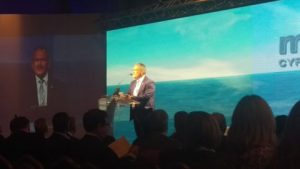 Today’s deliberations commenced with an address delivered by the Mayor of Limassol, Mr. Nicos Nicolaides, on the theme “Limassol as a maritime and energy hub”. Mr. Nicolaides noted that Limassol is a city of new opportunities and has the largest port on the island. Moreover, it is a fully fledged maritime centre. The Mayor commented on Limassol being the financial capital of Cyprus which offers high quality services. The Municipality supports all efforts towards the exploration and exploitation of hydrocarbons.

The first panel discussion relating to “Market Forecasting” was moderated by Mr. Bob Jaques, Editor of Seatrade Maritime Review. The panelists for this discussion were Mr. Alfred Hartmann, President of the Association of German Shipowners (VDR), Mr. Fotios Katsoulas, Shipping Data Manager and Fleet & Newbuilding Analyst of Affinity Research LLP and Mr. Peter Sand, Chief Shipping Analyst of BIMCO. The discussion was focused on the current market trends, and it was noted that freight profitability is a tangible target for the very near future. It was stressed that the market is currently experiencing a better fundamental balance between supply and demand. The panelist also discussed the importance of maintaining the right level of scrapping, as shipowners can influence the supply of vessels but the demand aspect is beyond their control. It was mentioned that a substantial demand in dry bulk was noted in the first half of this year, a clear sign of positive development in the industries affecting global shipping. Regarding oil tankers, it was mentioned that the market will increase by 2020 provided the balance between supply and demand is maintained.

The tanker fleet is still growing while scrapping is affected by the current age profile of the fleet. Reference was made to the orders of the largest container ships in the world in September 2017, and the decreasing life expectancy of the container vessels was discussed, citing a recent example where a 9 year old container vessel was scrapped. Mention was also made of the collapse of Hanjin Shipping and the necessary market’s recovery period. Container rates have shown an increase during the last months and hence the market looks promising.

The second discussion centered around “Drilling Forward”. The Moderator for this Discussion was Mr. Sony Kapoor, Managing Director of “Re Define” – Institute for New Economic Thinking, and the panel was comprised of Mr. George Lakkotrypis, Minister of Energy, Commerce, Industry and Tourism of the Republic of Cyprus, Mr. George PapanastasiouManaging Director of VTT Vasiliko Ltd and Mrs. Elfride Covarrubias, Business Development Manager for Italy and Mediterranean Area of DNV GL. The panelists analyzed the potential of the hydrocarbon discoveries in the Eastern Mediterranean Region as well as the geopolitical aspects. Large discoveries in the region and the prospect of substantial hydrocarbon resources have sparked major international interest.

The Eastern Mediterranean remains one of the world’s most under-explored areas. These discoveries offer opportunities for Cyprus in terms of energy security, economic prosperity and regional cooperation. It was stressed that the exploitation and export of these resources present numerous technical, administrative, security, legal and political challenges. Therefore, these resources should be developed for the benefit of all the countries in the region in order to avoid causing any unnecessary disputes to the Eastern Mediterranean Region. Reference was made to the strategy of the Government of the Republic of Cyprus on oil and gas, and the panel discussed the issues of geopolitical alignment with the countries in the region and the companies operating from within Cyprus, the exploration and exploitation of the hydrocarbons, infrastructure and the relevant legislation. It was stressed that Cyprus should invest in the future of renewable energy sources as well as in education.

Following this last debate, the Permanent Secretary of the Ministry of Transport, Communications and Works, Mr. Alecos Michaelides, delivered the conference’s concluding remarks. The Permanent Secretary thanked all the participants and high calibre speakers, panellists and moderators as well as the Conference sponsors and co-organisers the Cyprus Shipping Chamber and the Cyprus Union of Shipowners.

Last chance to nominate for the 2017 Greek Shipping Awards

Valentin Gautier on the up