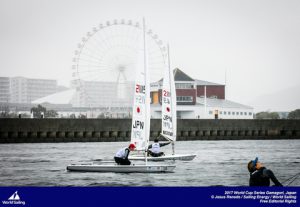 Japan’s sailors racing at their first ever home World Cup Series event will not only have to deal with the weight of expectation from their nation, but also the pressure of selection trials for the 2018 Japanese Sailing Team.

Out of the 251 sailors from 38 countries registered to race in Gamagori, the Japanese team have the largest contingent with 51 competitors racing in 34 boats.

Awareness of sailing in Japan has increased following the Olympic focus from Rio 2016 shifting to Tokyo 2020. Post Rio 2016 the team welcomed talented sailors and it now features many aspirants and experienced Olympians.

However, only one sailor per nation can go to the Olympic Games and the Japanese team will be using the World Cup Series event on their home waters to reduce their numbers to the leading competitors who will race on the Series and major events in the future before selection for 2020. 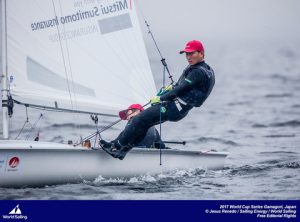 Aiko Saito, Japanese Sailing team leader and 1988 and 1996 Olympian, commented, “This is the start of a new page for us. In the beginning, we spoke about dreams but this is the real start for sailing in Japan.

“We’ll use this regatta, Enoshima Olympic Week and the RS:X Worlds in Enoshima to decide our team.

“If sailors make the top ten in October’s World Sailing Rankings, then they will be in the team. If any team beats them in the selection regattas, they’ll also join the squad. If there are empty places, we’ll select hopefuls, looking ahead of 2024.”

The Japanese sailing squad has a beautiful blend of experienced Olympians and those aiming to reach the pinnacle of the sport for the first time.

The Men’s 470 fleet will be the main Japanese hope for a medal at Tokyo 2020 with strength and depth in numbers in their eight-boat squad. Tetsuya Isozaki and Akira Takayanagi represent their best hope at the moment following their silver medal win at the Miami World Cup Series event but Saito knows reducing the numbers will prove challenging.

“The most difficult selection is the 470 Men,” she expressed. “We have very good young sailors but we have to squash the team and the top guys have to do a lot of work to stay there.”

In her role, Saito is responsible for the whole of the Japanese team including the athletes, coaches and support staff.

Dempsey is leading the coaching of five Men’s RS:X sailor and has been tasked with bringing a young team up to the level of three-time Olympian Makoto Tomizawa. Brett is taking charge of the Laser Radial sailors and Czajkowski will oversee the 49erFX racers.

In terms of local, Gamagori, favourites. Hopes will be pinned on Takuya Fukumura in the Men’s RS:X and the 49erFX crews of Chika Hatae and Hiroka Itakura as well as Sayoko Harrada and Seira Nagamatsu.

Racing at the 2017 World Cup Series Gamagori will commence on Tuesday 17 October at 11:00 local time.

Live Medal Races on Saturday 21 and Sunday 22 October will bring the week to a close before the series heads to Miami, USA.

Rickmers-Line and RZ Carrier certified according to latest ISO standards