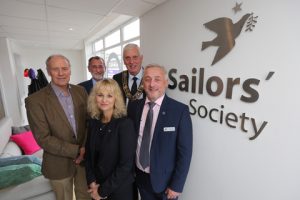 The centre gives seafarers docking in the city’s port, which handles around 14 million tonnes of cargo annually, the opportunity to access support services and free Wi-Fi.

The Mayor of Southampton, Councillor Les Harris, who officially opened the centre, said: “Southampton is the gateway to the world and I’m sure that this centre will welcome seafarers from all over the globe.

“It is a first class facility and I think anybody would be pleased to come, kick off their shoes and take a rest and respite from work on board a ship.”

With Sailors’ Society’s head office in Woolston, its CEO Stuart Rivers feels it is important that the charity is able to offer seafarers visiting its home port increased access to support.

“Seafarers can be at sea for months with limited or no connectivity, which can lead to isolation and loneliness. The new centre gives them the chance to unwind and get in touch with loved ones,” he said.

Last year, a seafarers’ centre at Queen’s Terrace closed after 132 years in the city due to lack of use. Sailors’ Society has taken account of the changing habits of seafarers arriving in the city and put the new centre in a busy, central location. 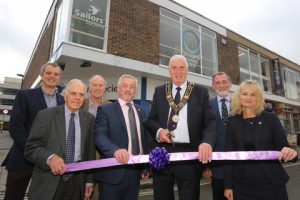 Stuart added: “It’s really important that we give seafarers what they want and offer them bespoke services, depending on the location and need.

“Seafarers are generally drawn to places where a number of facilities are available and the new Southampton centre is in a great location, which is able to offer this variety.”

The centre’s development will also include the Society’s first Southampton-based charity shop, which is due to open soon.

The charity’s director of development Adam Stacey, said: “We all rely upon the world’s 1.6 million seafarers to transport 90 per cent of the goods we use on a daily basis.

“The new shop will offer a chance to thank them for the sacrifices they make and we’re really hopeful that the generous people of Southampton will support a local charity through purchases and donations.”

Founded in 1818, Sailors’ Society is approaching 200 years of caring for seafarers and their families. Last year, the charity’s chaplains and ship visitors reached out to more than 400,000 seafarers, providing support such as Wi-Fi hotspots, transportation and a listening ear. The charity also supports seafarers’ welfare needs through welfare grants to alleviate hardship and distress, nautical educational grants to further their qualifications and through a scholarship programme for four UK students each year.