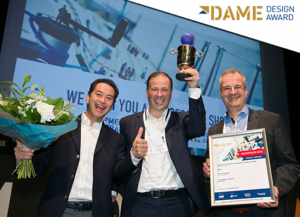 British entries account for more than a third of final nominations

Nominations for the prestigious DAME Award 2017 have been announced, with British innovation and engineering at the forefront once again, with UK products making up over a third (22) of the 64 selected entries. The DAME Awards, in their 27th edition, have cemented themselves as the world’s number one international design competition for new marine equipment and accessories. This recognition of British products and businesses highlights the outstanding contribution the UK continues to make to the global marine industry.

Out of the UK finalists 14 of the entries come from member companies of British Marine, the membership organisation for the UK leisure, superyacht and small commercial marine industry. This includes the latest innovations from Blood Red, CEproof Group, MarShip UK, NRG Marine and Oceanair Marine. There were also nominations for two of last year’s nominees – Lumishore and Exposure Marine. And Rooster Sailing and Scanstrut get special mention for collecting two nominations each this year.

Just reaching the final round (64 from 122 total entries) is high praise indeed and recognition of a business which is leading the way in its respective field. The judging panel will now consider the nominees further against criteria which includes the expected impact on the marine industry, the level of innovation, ease of use or installation and environmental impact.

There are seven category winners to be chosen and one overall winner. They will be announced during the Breakfast Briefing on the opening day of the METSTRADE Show 2017, taking place 14 – 16 November 2017 at the Amsterdam RAI.

Howard Pridding, Chief Executive at British Marine said: “Once again British innovation and engineering is leading the way at the globally renowned DAME Awards. To secure so many nominations year after year is a testament to how, as a nation, we challenge ourselves to constantly learn and improve. These UK companies, and British Marine members especially, are to be commended for their hard work and for ensuring we remain firmly at the forefront of the global marine industry.”

DAME Jury Chairwoman Birgit Schnaase commented: “The overall standard has improved again compared to last year’s entries, and there were many items of interest for all aspects of naval architecture, exterior styling and interior design.

“The marine sector’s end users are changing – older and younger generations often have different ideas about what they want from a boat and their marine equipment, with younger people often forgoing their own boat and preferring more accessible products. Wealthier customers’ tastes are diverging even more from those of other users. We are seeing welcome evidence that products are being developed to address these market changes.”