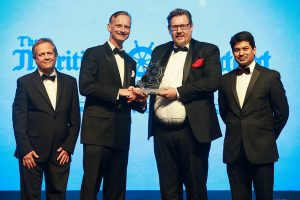 Dubai, UAE, 30 October 2017 – The GAC Group has won the Ship Agency of the Year title at The Maritime Standard Awards 2017. It is the second consecutive year the company has received this prestigious accolade.

GAC’s award recognises it as the agency that has made the greatest contribution to the shipping industry in the Middle East and the Indian Subcontinent, measured across a range of variables including customer service, efficiency, network outreach, new products and services launched, and new business secured.

Fredrik Nyström, Group Vice President – Middle East, says: “We found ourselves on the winners’ podium at The Maritime Standard Awards, hot on the heels of winning the Seatrade Ship Agent Award earlier this month. Both recognise the hard work of our staff at all levels, who are committed to delivering the highest standards of shipping services to our customers.”