Beata Korabiowska and her unique SHE HORSE brand 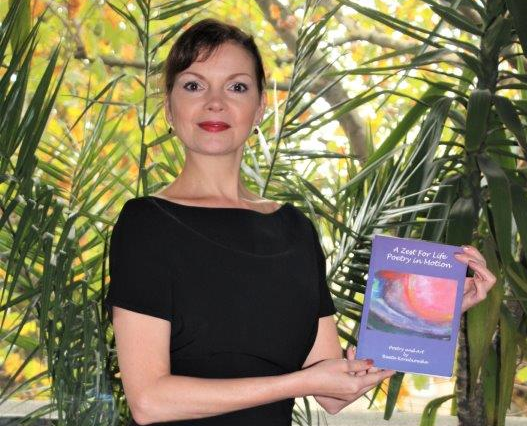 Beata Korabiowska and her unique SHE HORSE brand

“My unique brand is SHE HORSE. It is all about sensuality,” says Beata Korabiowska, Polish-born multi-talented artist, poet and photographer living in London. The brand name says everything, or nearly everything: Beata’s most dramatic output fuses her personal image with that of equine creatures, the resulting canvases bursting with colour and vitality.

Transcending biological order, in this dream-fuelled scenario a beautiful woman mutates into the quintessential horse, and this pure horse in turn becomes the agent of her persona.

Beata identifies with the sleek quadruped to the extent that many of her portrayals of horses include a component of herself: sometimes a single eye and glimpse of alluring figure, at other times the full length of svelte body.  In every instance, they are compelling works that touch the senses. 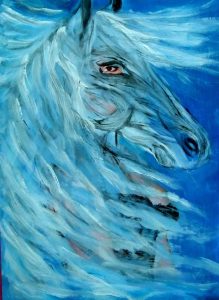 For long, she has been entranced by “the pure beauty, strength and magical sexuality of the horse,” and with their heads high, “they move so gracefully.”

By intertwining the artist’s soul with that of the animal, a “mystical feeling” emerges within what she terms “a modern mythology.” This identifies a connection between her work and the first beings imagined by civilisations: half- human, half-animal beings or therianthropes, in art carved into the rocks. The term derives from the Greek therion for wild animal and anthropos meaning man.

This perceived ability of men and women to reconfigure themselves as animals questioned the boundary between the worlds of humans and animals. Centaurs, with the upper body of a human and the lower body of a horse, featured in Greek mythology and eventually female centaurs called centaurides “appeared” in the 4th century BC. In addition to such amalgams, an intriguing figure of ancient Greek belief was Pegasus, a white winged horse sired by Poseidon, god of the sea, and foaled from the neck of the gorgon Medusa.

The “personal modern mythology” of Beata is blessed with a state of tender beauty and humanity.

The masterly way she merges her images give each viewer a sense that they are witnessing the very moment of the transformation.

Bitten by the buzz of creating horses to take on the human form of the artist – “the artist becomes She Horse” – Beata is determined to stay on that track.

Friends have suggested she apply her skills to depicting other inhabitants of the animal domain, but she is resolute in adhering to the equine motif. Nor does she feel the need to glean inspiration from the great painters of the past or present, as do many of her contemporaries. “My inspiration comes from within me and makes me original,” she counters.

The animal gaze fascinates Beata. “You can see the strength in the eyes, afraid of nothing.” The flowing mane and tail of the mares underline the synchronic phenomena of spirited woman and horse. “Horses for me possess an ethereal and magical quality that can be truly felt.”

Photo by Beata at Denbies Wine Estate, where she exhibited work.

In a previous interview (with the magazine Inner Surrey) Beata said: “There are as many curves and shapes on a horse as there are on a woman. It makes me look at the aspect of the horse from different angles. I am fascinated by bones, muscles, tendons and their mechanisms. To me, [horses] represent sacred spirit – spirit of the earth.”

She is proud of a photo she displays on her website showing one of her first outings on horseback, at the age of seven or eight. That picture is charming for the young girl’s gorgeous smile, and at the same time a potent portent of a unique career in which horses remain at the core of her world.

She says that a lot of nonsense is written about art, with critics pigeon-holing the objects they see and thus distorting their meaning. Art means many things to many people; one picture can mean a thousand things to a thousand people. “What does expression through art mean to me? It means touching people’s hearts directly.”

Beata feels that most of her pieces need no description and can be left to the spectator to interpret, as they are possessed of an inner strength that speak in a universal language of the values of the artist. Titles there are, though, such as Sensuality, Expressions, Expressions Within and Enigma.

She says that in her painting, surrealism, abstraction and childlike freedom of expression join in a reflection of her personality. “I don’t conform with styles, I express myself which makes me feel freedom, which makes me happy, which makes me a creator.” 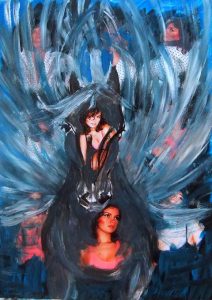 The artworks are in mixed media: photographic paper for the images of herself, and for the horses, oil paint, a combination which is technically very tricky to work with.

Her passion for horses began when she was a child, and the staging point for artistic growth was spurred by a family friend Maciej Falkiewicz, a recognised painter, and a breeder of horses. Born in Lublin, Maciej Falkiewicz studied at Warsaw Academy of Fine Arts, and in the mid-1970s, settled in eastern Poland, where besides his artistic work, he was involved in the local academy of physical education, and the riding club. Beata admires his oils and water-colours of landscape, genre and of horse and hunting themes of a traditional nature. He created his own gallery at Janów Podlaski, a small place famed for its stud, 115 km from Lublin. 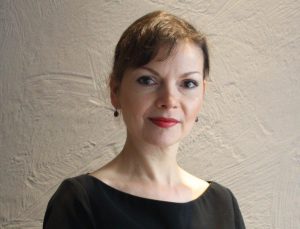 In Beata’s stable of accomplishments, the disciplines of painting, poetry and photographic expression “collaborate.” Very clearly on the same philosophical page as her lyrically eloquent paintings are her poems. These show that she has, in the meaningful words of a title she chose for one of her books, A Zest for Life.

“Your life might be splashes and scatters, but it comes together in the end,” says the vivacious Beata in a phrase that comes naturally to the visual artist in her.

Her versified themes are moralistic: confronting life’s ups and downs with a positive spirit. She seeks out “the connection with what matters most, and I know I can share these uplifting messages with other people. We all go through difficult times, but one has always to have a positive message in the end. There is so much negativity in the news.” 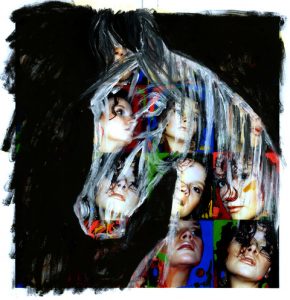 The poems – predominantly poised and exhortatory – are an essential part of her creative flow. All the same, there is something of the ambience of her paintings in which she is, “like the undefeated warrior-horse, ready to forgive and move on, but remember always all — her heroes and her tricksters.”

Indeed, the tranquillity of her family bliss with her daughters (symbolised in her painting Bliss with mare and foal showing love and protection) does not hide the fact that her self-belief has helped her ride out troubled times. “Faith conquers fears and love always wins,” she says, now serene.

The import of the concise compositions is always to the point, and it is absorbing to hear her read them in public in her impeccably clear diction (as most recently at a jazz and prosecco evening in October 2017 at Lancaster Hall Hotel in the West End of London). 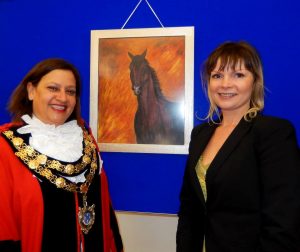 With Meena Bond, when mayor of Richmond-upon-Thames.

She has lived the majority of her life in London and seeks out “this city’s wonderfully varied, historic and colourful atmosphere; its cultural diversity and heritage proving inexhaustible and inspiring.” A favourite spot for her photography is Richmond Park, where she walks her family’s Jack Russell terrier.

Integration is the direction of her poetry and art, and is the title of one of her poems. “Poetry speaks directly to the soul with child-like clarity, allowing the reader in his privacy to drop his guard and enjoy the delights that await.”

Beata thrives on her philosophy as spelled out in seven words, Follow your wisdom and listen to your heart, from one of the richly resonant poems. 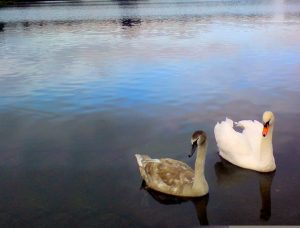 In other lines, she advises:

There is no such thing as “I can’t”
Either you can or you won’t,
You can fuel your fire or put it down
Either you have control or you don’t 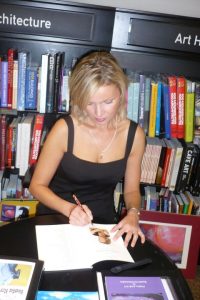