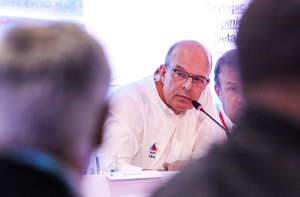 A week of discussion and debate from delegates at World Sailing’s Annual Conference in Puerto Vallarta, Mexico culminated in a two-day meeting of World Sailing’s Council.

The submissions that proposed change, made in advance of the conference and the subsequent recommendations made by the expert committees, were put forward to the Council. World Sailing’s Council subsequently voted on the submissions that shape and will unite the future of the sport.

Decisions were made on a wide range of topics that were not solely connected to the Olympic Games. Decisions on offshore sailing, keelboat racing, Para World Sailing and Racing Rules of Sailing were made that will impact sailors from the grassroots to the elite level of the sport.

World Sailing also reached out to the virtual world with a revolutionary launch of the eSailing World Championships. Click here for more.

The regulatory decisions made by World Sailing’s Council will go to the delegates at the Annual General Meeting for ratification on Sunday 12 November.

World Sailing will hold an Offshore World Championship in the future following approval from the Council. The Offshore Worlds will be held in One Design boats to help promote and raise the profile of Offshore Sailing which represents a significant element of the sport.

Selection of equipment, dates and venue as well as arrangements of the Worlds will be decided by World Sailing’s Board of Directors after consultation with the Oceanic and Offshore Committee.

The racing format for the Tokyo 2020 Olympic Games was decided. The Men’s and Women’s 470, Finn, Laser and Laser Radial will all sail an opening series which will be followed by a double point Medal Race.

Men’s and Women’s RS:X sailors will also sail an opening series and a double point Medal Race, however when the wind conditions suit planing, they will have a reaching start and finish.

World Sailing’s Council had a discussion and debate on the 49er and 49erFX Medal Race format. The Events Committee proposed that three single point races on the final day shall be sailed with the use of boundaries at the discretion of the Race Committee.

Council voted against the proposal and the 49er and 49erFX fleets will now sail an opening series and a single double points Medal Race.

The Council also noted that the Nacra 17 format had not been fully tested but it’s expected they will retain their current opening series and a single double points Medal Race.

The qualification system for Tokyo 2020 was also approved by World Sailing’s Council. The Aarhus 2018 Sailing World Championships will be the principal qualification event.

Para World Sailing representative to be included in Athletes’ Commission

In addition to the inclusion of an Athletes’ Commission representative, Council approved the equipment and formats for the 2018 Para World Sailing calendar.

To include athletes with high level disability, help grow participating nations and spectator / media appeal the following will be used in 2018:

World Sailing’s Council approved the introduction of a Governance Commission.

The Commission will undertake an in-depth and wide-ranging review of the governance structure of World Sailing. From there, they will make recommendations to the Board of Directors for modernising World Sailing’s governance.

From there they will consider and recommend changes such as composition, powers, functions and procedures before reporting to the Board and Council in May 2018 with proposed changes.

These will be presented in their final form to the Board in September 2018 and then put forward for consideration and review at the 2018 Annual Conference.

From 2022 onwards, the Para World Sailing Championships will be held alongside the Sailing World Championships.

More than 40 of World Sailing’s Class Associations are One Design keelboats. With keelboat sailing widely representing the aspects of sailing a “Champion of Champions” event will be established. The event will welcome World Champions of all World Sailing Keelboat Classes to promote keelboat sailing worldwide and showcase a keelboat pathway from club racing, through to class championships and into the Champions of Champions event.

The scoring system will be defined between RORC and ORC with prizes awarded to skippers and crews, not the boat, enabling chartering of boats.

Members of Judicial Board and the Ethics Commission were also approved.

The next meetings of World Sailing will be held from 12-15 May 2018 in London, Great Britain. Sarasota, USA will host the Annual Conference from 27 October to 4 November 2018.