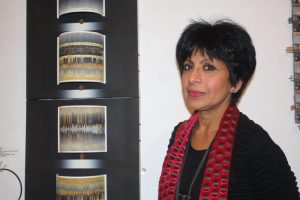 It is the most frequently uttered joke in the art shop – “2B or not 2B,” referencing grades of pencil and Hamlet’s great monologue as he ponders whether to take arms against a sea of troubles.

The multi-disciplinary London artist Sumi Perera has transformed the theme into much more than wordplay (a device with which she is very much at home).

Entitled 2B or Not 2B (To Be or Not To Be), Sumi’s interactive sound installation is one of the most intriguing, and complex, submissions at the London Group Open 2017 exhibition, which has opened at the venue known as the Cello Factory, located between Waterloo and the Thames. 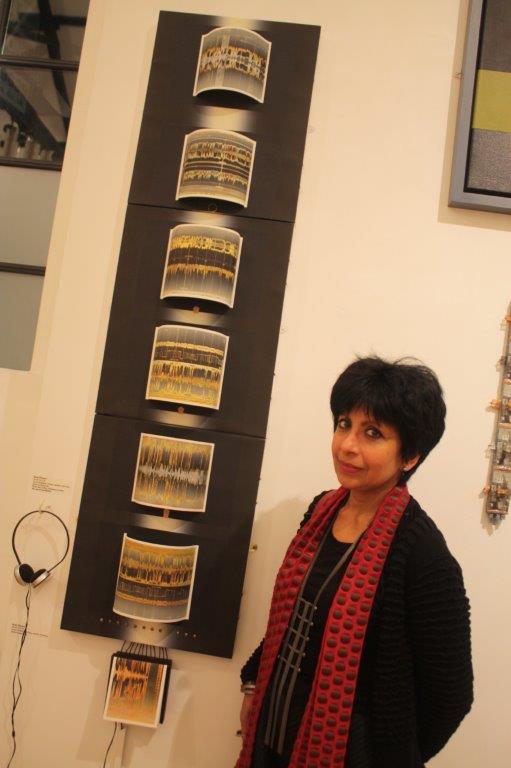 She constructed the 165 cm-high piece to commemorate the 400th anniversary of the death of Shakespeare. The resourcefulness and wit that distinguish the work had already ensured it was shortlisted out of 1,000 entries for the 2017 John Ruskin Prize at Millennium Gallery, Sheffield, and for the Neo:Print (International Print Biennial)  Prize.

It combines etching, aquatint, embossing and electroconductive ink, or as might be said using 2B pencil and “not 2B.”

In what she calls ‘participatory cartography’ Sumi transforms soundwaves from pencils scratching on paper into spiky graphs printed by the speciality ink.

She invites viewers to press buttons to activate any of a dozen tracks and listen through headphones to renditions of the phrase ‘To be, or not to be.’ At the other end of the line are Morse code, typewriter clicks and Hamlet interpretations from some of the great thespian voices including Richard Burton, Kenneth Branagh… and from Prince Charles, Monty Python and Blackadder.

The London Group is the UK’s oldest artists’ co-operative, and this is its 83rd open exhibition – the first was in June 1916.  Exhibiting are 71 of its 90 members and an equal number of non-members. 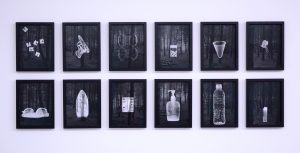 The group was set up in 1913 by 32 artists including Robert Bevan, Henri Gaudier-Brzeska, Jacob Epstein, Duncan Grant, Wyndham Lewis, Lucien Pissarro and Walter Sickert to counter-balance institutions such as the Royal Academy. Today it describes itself as “democratic artists’ collective.”

Now biennial, the Open is organised in two parts to show off to best advantage the submissions of artists working in a range of media, sometimes beyond the plane and beyond the frame. The works are accessibly hung on both levels of a double height gallery.

An eerie series of 12 photo-montages is shown by London-based Paul Tecklenberg. The silver gelatine prints show ghost-like plastic bottles and other non-decay waste items superimposed on an elegant forest scene (in Suffolk near the River Orwell). With the discarded objects looking skeletal, it can be read as a warning of the danger of artificial degradation of the natural world. 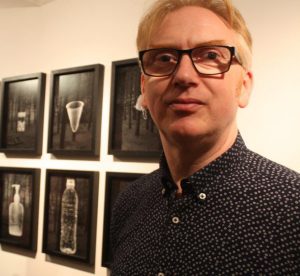 Paul has said: “Much of my practice is about perception; revealing what is usually hidden.” In an earlier work, a video, he showed the life of an alcoholic; and has made images that look like medical X-rays of bacteria, viruses or cell structures – but which on closer inspection are seen to be fabricated from objects one would find inside a kitchen cupboard or bathroom cabinet.

Another artist who re-interprets seemingly mundane vistas of modern life is Day Bowman. For this show, she submitted Study Rails and Railings 5 which is freely but finely drawn on cartridge paper in graphite, charcoal, coloured pencil and wash. Her depictions based on neglected parts of the urban landscape repay quiet contemplation – evocative imagery produced from seemingly unpromising subject matter. Her work “lies on the axis of figuration and abstraction,” as she says, posing the challenge of drawing out a meaning. Day has had a busy 2017, that has built on much exhibition success in the last few years. 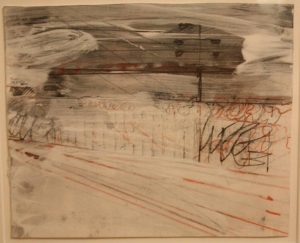 A more immediately figurative scene is painted in oil on canvas by Joshua Hilton. It is entitled Ritzy, referring to the restored 1911 cinema that is a great landmark in Coldharbour Lane, Brixton. One summer evening Joshua set off to see a film there, and the sight of people drinking and eating at the outside bar inspired him to compose the work. As to his approach to art, Joshua says: “The figurative tradition is still there, and I like to think that I am a part of it.  Responding directly to what we see around us has always been there and painting provides me with the visual language to do this.”

Sumi Perera has a penchant for ambiguous titles, and the 2B trope was just made for her Shakespearian tribute. 2B is the grade for a pencil of soft lead that makes bold, thick lines because of its graphite content, and is used for shading in sketches.

Her early work featured To Bare or Not To Bare, commemorating 40 years of British naturism and comparing modesty in different cultures; Against the Grain about men in dress; and Clothes Encounters of the Third Kind in several editions exploring machinations inside the garment industry. 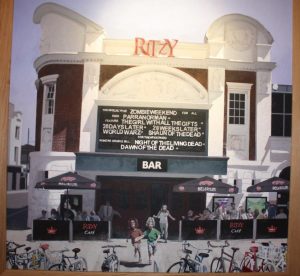 10 to 20-Sizing Up the Opposition was about ready-made dress sizes dictating body shapes and dimensions.

Sumi produced a book with a detachable spine allowing it to be “undressed” to “reveal hidden spaces.” Cast Offs was about stretchable knitted wear using abandoned, cast-off strips of metal.

“Much of my work is a discourse about the space occupied within and around the body,” she explains.

Still on her back catalogue, a series Mind the Gap looped 50 m of prints through glass cabinets, along walls and floor to suggest gaps and cracks at London underground stations. TOP 10 WCC (Top Ten White Collar Crime) involved 10 printed collars and lists of 10 white-collar criminals, 10 prosecutors, and 10 fictional and non-fictional criminals as tags to cut up and mix, allowing speculation on different outcomes by re-sequencing the criminals, their sentences and prosecutors. 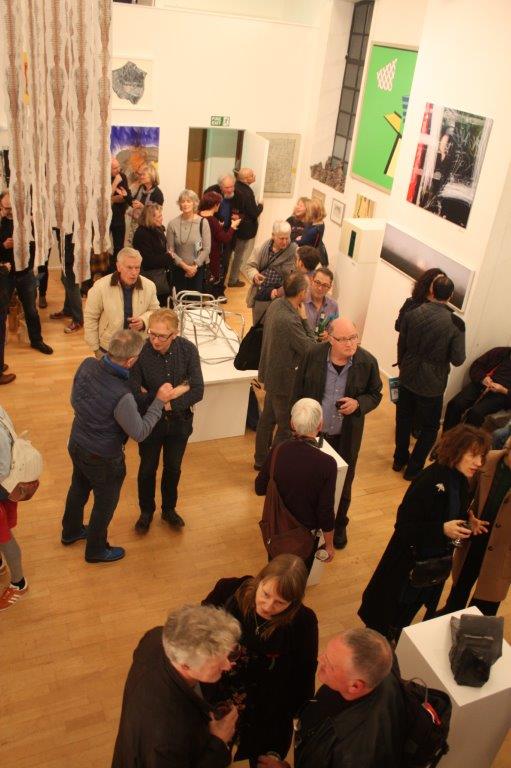 Her remarkable, multi-phase life as physician, scientist and artist givers a clue to the several narratives and techniques unfolding in her output. She was a medical doctor in her native Sri Lanka; returned to the UK for postgraduate studies in virology and worked at the London School of Hygiene and Tropical Medicine; and encouraged by her passion for books and publishing history of medical and scientific journals and textbooks, completed an MA in book arts at Camberwell College of Arts, University of London. She has won many prizes for book design, printmaking and for her installations, and her work is in collections including Tate Britain, Victoria & Albert Museum, Ashmolean Museum at Oxford, and Birmingham Museum.

She was artist in residence for the National Open Art Competition 2016, and the first recipient of a six-week residency with solo show at the Scuola Internazionale di Grafica, Venice.

At the private view of the new London exhibition, Susan Haire, president of the group, said that the Open had been the backbone of the London Group, and the latest edition received submissions from 27 countries and “an enticing diversity of works.” Susan is a prominent practitioner having had more than 20 solo shows since 1998, and collaborating with composers, poets and playwrights. Notably, she has worked with musician Stephen Dydo to make the most of the “special concentrated power of art and music” through sculpture and photography inspired by vanishing cultures. 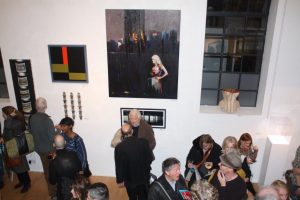 Another view of the private view

She welcomed to the event Anthony Eyton, who the Royal Academy says “continues to work with passion and energy into his 95th year. He has a show in the series Academicians in Focus, at the Academy Keeper’s House, which runs until January 29, 2018.

“Royal Academician Anthony Eyton can be considered as one of the very best English travel painters of the 20th century,” according to Tanya Baxter Contemporary Gallery of Chelsea. “His extensive travels through Asia, India and the continent have produced paintings that reflect the energy and colour of each location and the vibrancy and quality of his work has reaped many national awards as well as wall space in some of Britain’s finest public collections.”

Tony Eyton, the longest-serving member of the London Group,  declared: “We don’t have to toe the party line.  There is no party line.”

The venue for the last 10 years of the Open, the Cello Factory, was originally a furniture repository for the Savoy Hotel which became a factory and showroom for stringed instruments, especially Stradivarius. It is owned by an artist and is used for exhibitions and music recitals.

The 83rd London Group Open is at the Cello Factory, 33-34 Cornwall Road, London SE1, part 1 until November 17, and part 2 November 22-December 1, 2017. Members of the Group invigilate and welcome visitors at each session.