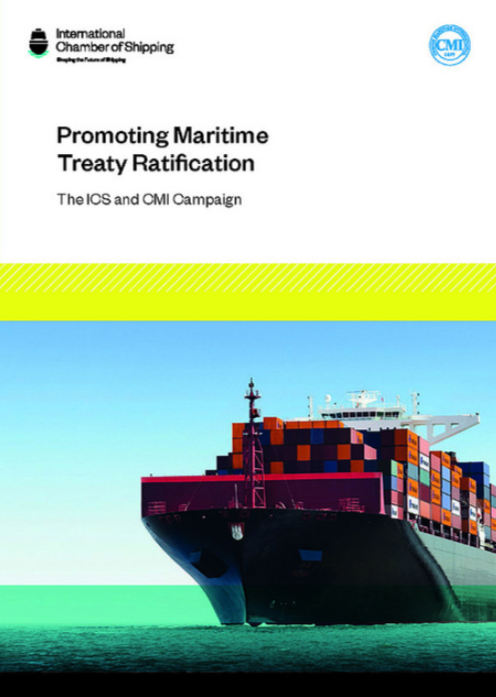 The International Chamber of Shipping (ICS) – whose member national shipowner associations represent over 80% of the world merchant fleet, and the Comité Maritime International (CMI) – the international association for maritime lawyers, have released an updated brochure to promote the importance of governments ratifying international maritime conventions, especially those adopted by the UN IMO.

The aim of the brochure ‘Promoting Maritime Treaty Ratification’ is to encourage more widespread ratification of some key maritime instruments that would benefit from a greater level of global acceptance. This includes a number of important instruments which have not yet received adequate ratifications from governments to enter into force globally.

The new campaign particularly focuses on three key IMO instruments: the Hong Kong Convention on ship recycling; the 2003 Protocol to the 1992 Civil Liability and Fund Conventions concerning oil spill compensation; and the 2010 Protocol to the HNS (liability) Convention.

“While the slow pace of ratification of these crucial IMO instruments remains disappointing, there is now some cause for optimism.” explained ICS Chairman, Esben Poulsson.

“In particular, the Hong Kong Convention on ship recycling has been ratified by the world’s largest flag State, Panama, having previously been ratified by Belgium, Denmark, France and Norway. Turkey, a major ship recycling nation, is also expected to ratify soon. But other IMO Member States now need to build on this momentum or else be faced with the confusion likely to be caused by unilateral or regional regulation.”

CMI Secretary General, Rosalie Balkin, added “We are pleased to again be co-operating with ICS on this important campaign, which we hope will enhance the profile of some important IMO instruments that are sometimes overlooked.”

The new brochure, which can downloaded from the ICS and CMI websites, also highlights a number of other conventions that require wider ratification, including the IMO Ballast Water Management Convention, which entered into force in September, and the ILO (Revised) Seafarers’ Identity Documents Convention.
The brochure also promotes several other instruments that address international liabilities and compulsory insurance cover for ships.

ICS and the CMI continue to emphasise that shipping is an inherently global industry reliant on global regulatory frameworks to operate efficiently. The alternative would be a plethora of regional or unilateral regulations, which would lead to chaos within the international shipping industry while hindering the smooth flow of global trade

MacGregor celebrates opening of its Head office in Singapore