Europort’s vital role as a hub for global maritime business was reflected in its continuing attractiveness to international visitors and a series of business deals signed while the 2017 event was in session. 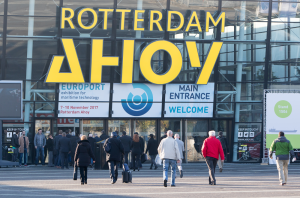 From the exhibition’s entrance…

A busy four days in Rotterdam starting 7 November saw 26,733 visitors from 93 countries descend on the Rotterdam Ahoy venue, where a total of 1,100 exhibitors including 14 country pavilions welcomed guests, with many of the 40 side events focusing on three core themes: Big Data; The Human Factor; and The Environmental Age.

In a first for Europort, the 2017 event also hosted the US Coast Guard’s Automated Mutual Assistance Vessel Rescue (AMVER) 2017 Awards, marking Rotterdam’s debut as a venue for the prestigious ceremony. The Awards recognized the contribution of 11 companies from the Netherlands which have made their vessels available for search and rescue around the world. Benjamin M. Strong, Director, AMVER Maritime Relations at the US Coast Guard, said: “Rotterdam is a major port and presenting AMVER awards to our Dutch partners at Europort just made sense.”

Among other innovations this year was a special breakfast organised by inland shipping association Royal BLN-Schuttevaer, presenting a vision for inland waterway transport, followed by a discussion with politicians formatted in the style of popular Dutch TV show ‘Dit was het nieuws’ (‘This was the News’). Meanwhile, a new mini-symposium on the Royal Netherlands Navy replacement programmes saw the Netherlands Maritime Technology and the NIDV Foundation introduce discussions on the opportunities and challenges connected with building new Dutch submarines, frigates and minesweepers.

Also jostling for attention at Europort 2017 were the strongly-attended CEDA Dredging Days and the well-received RINA ‘Power & Propulsion Alternatives for Ships’ event, which explored new fueling propositions for ships and the use of emissions-free technologies including renewables. Europort’s topical approach to constituencies that other events find hard to reach was further demonstrated in a special OSPAR gathering focusing on Handling (Plastic) garbage in the Fishing Sector.

The Europort 2017 agenda was enhanced by four ‘masterclasses’ offering insights into subjects that are now firmly part of the maritime lexicon. A Human Resources masterclass, for example, underpinned the broad-based commitment of Europort 2017 to Human Capital, in its role as a catalyst for the next maritime generation. The week brought the innovative Meet Your Peers Event, organised by Netherlands Maritime Technology (NMT), and the YoungShip ‘Captains of industry and how to become one’ seminar.

Albrecht Grell, Executive Vice President DNV GL, told the opening Europort session that “if the maritime industry is not at the forefront of technology, the next generation will not be there – the industry will not be interesting enough for them”. Accordingly, this year’s event included the Start-Up Plaza, where new maritime entrepreneurs put on five-minute pitches on a special stage within the plaza. The last day also saw a ‘Maximising Young Talent’ showcase session that allowed 10 would-be entrepreneurial students to pitch their innovations at ‘Speakers’ Corner’, with the best winning prizes awarded by jury and public vote selection.

Energy Efficiency and ‘Big Data’ also warranted separate masterclasses, with the latter reflecting the emergence of an industry game-changer as far as fleet management is concerned. “When it comes to gathering KPIs such as fuel consumption, emissions and maintenance, collecting and understanding data is crucial,” suggested Matt Duke, VP Digital platform, Maritime Industry – Kongsberg Digital.

Meanwhile, while most people are familiar with the Internet of Things, its impact on the supply chain is less well understood. Europort 2017 included a special masterclass focusing on Blockchain technology, and the advantages of distributed ledgers.

Elsewhere, the Royal Association of Netherlands Shipowners (KVNR) opened a ‘Shipowners Lounge’ and, all round, the Rotterdam event once more demonstrated its credentials as a vital meeting place for maritime business, positioned at the heart of a global community.

Yannick Eberhard, Simulator Engineer for PROMARIN described Europort as “the perfect match between clients and suppliers”. Caterpillar Marine unveiled its new multi-engine optimisation tool for the first time while, exhibition visitors were also introduced to new propulsion, automation and wheelhouse technology for tugs. These included thruster technologies from Veth Propulsion, who introduced its integrated electric-driven L-drive at the exhibition, and the presentation of integrated X-Connect automation, alarm monitoring and power control systems by Ulstein Power & Control.

Furthermore, Dr. Hossein Ghorbani, CEO of Iran’s Arvandan shipbuilding company, commented: “Arvandan signed a MoU with Damen Shipyards covering the construction of two offshore vessels. After this exhibition, many high-profile companies are looking forward to developing collaboration with Arvandan and we have had a very good exchange with the manufacturers and equipment suppliers.”

The next edition of Europort will be held between 5-8 November 2019, for further details and to exhibit please visit www.europort.nl

The Robot Over Your Shoulder