An innovative approach in the campaign for the Parthenon Marbles 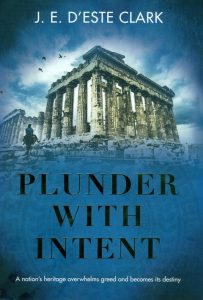 The novel Plunder with Intent was released on 9 November 2017. It made its pre-launch debut at a dinner of the Greek Press Association-UK, at the Greek Larder Restaurant at King’s Cross, London, on Friday 20 October 2017.

The author, Joanna D’Este Clark, was present at the dinner. She said she has devoted her whole working life to this book. The Canadian author originally studied architecture and history and fell in love with the Parthenon story. Over the past 10 years, she has been a warm supporter of the British Committee for the Reunification of the Parthenon Marbles. In 2016 she was invited to speak about her new work at the Acropolis Museum. Her book is based on the story of the Parthenon sculptors. She seeks through fiction to expound the true history and to stir public opinion. It amounts to an innovative endeavour beyond the academic and political world on the complex issue of calls for the return of the Marbles.

Ms Price was the head of Government Economic Service, a group of economists working with government, and is now a director of the Centre for Economics and Business Research. She is keen for Greece to be better supported by the EU and urges Britons to take their holidays in the country.

Mr MacShane has recently written a book entitled Brexit no Exit in which he claims that Britain will never really leave the EU. “Things will change only on paper,” he said. “The negotiations for the departure of Britain from the EU will last for many years and, slowly in the foreground, will appear the young people who support a soft Brexit.”

Tom Holland, a graduate of Cambridge University department of classics, takes a keen interest in the history of the Middle East and South Eastern Europe and recently has become well known with Islam: The Untold Story a documentary commissioned by Channel 4 on Islam, the Islamic State and terrorism. “The ISIS Jihadists interpret the Quran in their own way to justify what they are doing.” Mr Holland spent some time in Iraq to make this film.

Mr Holland referred to the negative effects of globalisation and the tensions it has created in Europe as we have seen with Brexit and the movement for autonomy in Catalonia. On another theme, Mr Holland, who has travelled in the Peloponnese and the islands, asserted that Greece has the best food. H daughter is studying Ancient Greek at Oxford.

The dinner was in honour of the new press counsellor at the Greek embassy in London, Elena Soupiana, and new members of the press office Alkis Delantonis, Petty Syriopoulou and Nancy Andriopoulou.