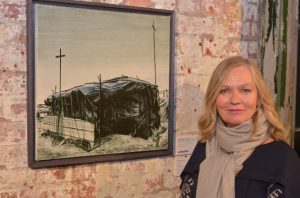 After surviving an arduous journey across North Africa and the Mediterranean and overland in France, only to be forced to bivouac on waste ground outside the port of Calais, a group of Eritrean refugees had a priority: to construct a church.

“In spite of having very little materially, they still had the solidarity of each other and their faith,” says London artist Marguerite Horner, who was one of a group of Christians from the UK who visited the so-called Calais Jungle in 2014.

Marguerite participated in the mission on a humanitarian basis, without thought of making any artwork out of her experience. She inevitably retained in her mind, and in the photos she took, powerful images of the harsh conditions of the camp, and eventually felt driven to create a body of paintings on the subject.

One of those works, an atmospheric and affecting composition entitled Church has now won one of the top prizes at the National Open Art (NOA) 2017 exhibition in London.

That church, cobbled together with plastic sheeting and wood, with tall crosses fashioned from thin sticks, represented for the displaced men and women vital spiritual support. “Outside it was cold and muddy, but inside this church it was carpeted and cosy,” recalls Marguerite. “We all took our shoes off and prayed in front of their little altar, surrounded by candles and a tinsel-covered Christmas tree, while outside the wind and rain battered against the plastic sheeting. 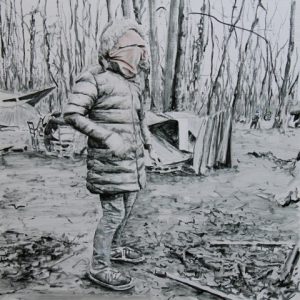 “Despite the lack of material comforts in the camp, a human solidarity was still there, giving meaning to their situation.” Rudimentary though the construction was, it was “the space that brought people together. Church is a record of that time – a symbol of hope and faith when people’s lives were falling apart.”

The award was given to Marguerite by MS Amlin, the London-based arm of Japan-based insurance group MS&AD. The insurer challenged artists competing for what it called the MS Amlin Continuity Prize to respond to the theme of “continuity in an uncertain world.”

There will have been no physical continuity for the makeshift church.  It will have been swept away in one of the clearances ordered by the French authorities as they attempted to disperse the migrants around the country. 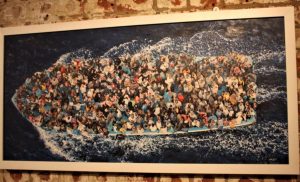 Marguerite recalled the Calais camp episodes and the generosity of people who donated aid, as she accepted the prize during a private view on November 23 of the exhibition at the Bargehouse, a historic part of Oxo Tower Wharf, close by Blackfriars Bridge.

Her winning painting is one of a series she calls Keep Me Safe. The monochrome images, in oil on linen, underline the harshness of conditions in the Jungle. Marguerite favours monochrome because it suits the spontaneity she says she needs for such work. Viewed from close-up, the textural delicacy of Church make it even more soul-touching. 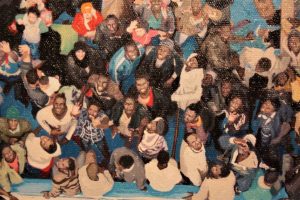 She and her companions had been shocked to see children walking without shoes, and adults without adequate clothing, despite the cold of winter.

Of the winning painting, MS Amlin global director of communications Adrian Britten said: “In Marguerite’s piece we see how people feel they want to face life’s uncertainties together, to share the challenges and support each other; and these are concepts at the heart of our insurance business.”

He congratulated Marguerite for being selected from more than 950 submissions for the award, adding that the quality of entries meant “we should celebrate everyone who made it to the shortlist for the vibrant cultural life they help us to enjoy.” 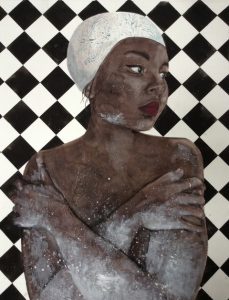 Now in its 21st year, the NOA claims to be the UK’s premier open art competition for emerging and established artists based in the UK and Ireland.

MS Amlin is a leading entity in property and casualty, marine and aviation insurance, and reinsurance, and employs more than 2,400 people in 26 locations, since 2016 as part of the group formed by the 2010 merger of Mitsui Sumitomo and Aioi Nissay Dowa. It operates from its hubs in the Lloyd’s and UK market, Europe, Asia Pacific and Middle East.

Meanwhile, another painting by Marguerite, Primark coat, from the series Keep me Safe has been shortlisted for the Threadneedle Prize 2018 exhibition. This is one of the studies that show the refugees in their ill-fitting but warm new clothes. 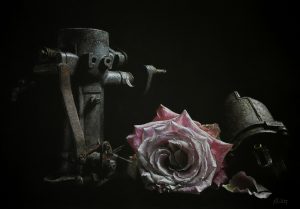 When machines take over. By Patsy Whiting.

In all, 35 prizes worth a total of £50,000, were awarded at NOA 2017. The main exhibition of art, photography and short film, was shown to advantage across nine rooms.

There was more on the migrant theme in the main show. Refugee Rescue, an oil painting with a photographic quality by Stephen Burgess, won the world art vote sponsored by MS Amlin. It pictures a boat rescued by the Italian navy, full of people with smiling faces. Smiling? “I wanted to portray the euphoria experienced in these people’s faces when, after facing death, [they experience] the relief of rescue and a new life,” said Stephen. He acknowledged his inspiration was a photograph by Massimo Sestini. 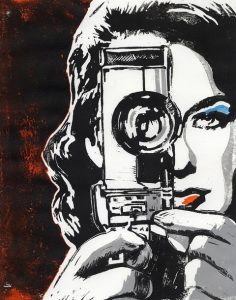 Among other prize-winners was Margie Andrew-Reichelt with her watercolour entitled Monochrome. Margie said that the work was a portrait of a conversation she had with her daughter about her identity and vulnerability of being a teenager in society today.

Patsy Whiting chose a nervously topical title, When machines take over, for her study in coloured pencil, in which carburettors are contrasted in dramatic lighting with a single faded rose.

Shelley Dyer-Gibbins showed her linocut Cinegirl. In her statement, Shelley said: “Art: such a small word for something that encompasses so much.”

Among six artists-in-residence at the Bargehouse was painter and printmaker Rosie Burns, whose symmetrical array of paint tubes and brushes was a bonus attraction alongside her canvases. Rosie’s virtuosity extends to city and shore scenes in drawing, ink, watercolour and print. Gender, femininity and sirens are frequent themes. 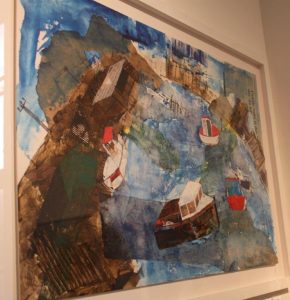 Another artist-in-residence, Sally Buchanan, is working on a site-specific installation relating to her research into the history of the Bargehouse and South Bank area. A former general practitioner, Sally is a London-based multimedia artist. She says that she “combines conceptual principles with meticulous craft and a dash of wit to make installations, sculptures, embroideries and land art.”

It is hardly necessary to observe that, as in most exhibitions of contemporary art, there were many marine themes.  Among them was a characterful mixed media work offered by Dave Nelson picturing Paddy’s Hole, High Tide. This refers to a small harbour at the mouth of the Tees. 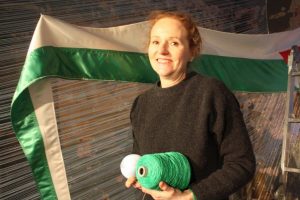 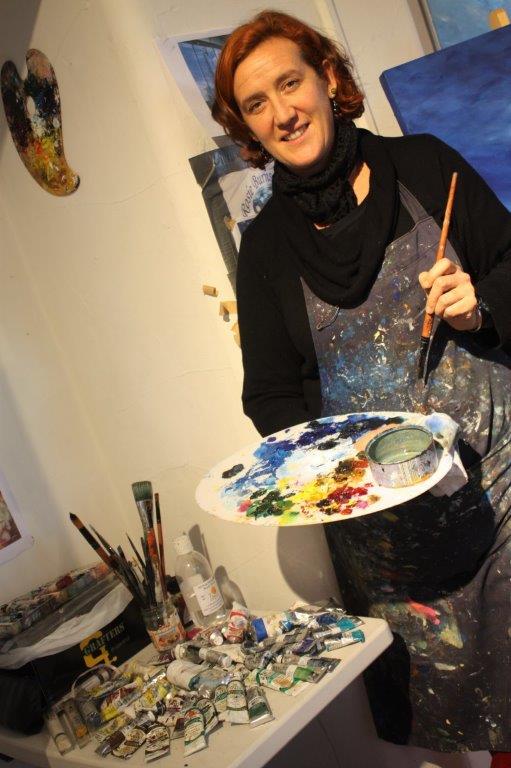