Growth in income and new business for HSH Nordbank

HAMBURG/KIEL – Based on operating successes, considerable progress in reducing costs and legacy assets while showing strong capital ratios, HSH Nordbank is well prepared for its upcoming privatisation: Group pre-tax profit up to the end of September rose to € 201 million (January – September 2016: € 183 m). The forward-looking Core Bank generated net income before taxes of € 609 (532) million. All four of the operating divisions contributed to the good business performance: Corporate Clients, Real Estate Clients, Shipping and – due to the planned reversal of unrealised gains – particularly Treasury & Markets.

Regardless of these evident improvements and recently some pick-up in the shipping business, the Bank reaffirms its existing income forecast for 2017 by still targeting Group pre-tax profit to match the 2016 level (€ 121 million). This applies subject to potential and currently not identified insights from the privatisation process.

“With this good interim result, the support of our clients and the resolute reduction of legacy assets, key parameters for the change of ownership scheduled for February have been set. The Bank is performing well, is now solidly positioned and has established the basis for a successful future under a private ownership structure,” said Stefan Ermisch, Chief Executive
Officer of HSH Nordbank.

Solid Group net result underpinned by the Core Bank
Group net income before taxes improved by about ten percent year on year to € 201 (183) million; after taxes, the figure was € 176 (163) million. The Group’s net result was underpinned by the Core Bank’s pre-tax profit of € 609 (532) million, which benefited from operating income as well as planned exceptional effects involving the managed sale of promissory
notes. These unrealised gains were realised to offset the losses of the Non-Core Bank as anticipated by loan loss provisioning, in the amount of € -476 (-175) million. The items for the entire Bank pooled under ‘other & consolidation’ amounted to € 68 (-174) million.

Administrative expenses down considerably – burden of privatisation costs
The Bank’s strict cost management is reflected in the considerable, 13-percent reduction of administrative expenses to € -366 (-421) million. Heavy spending on regulatory requirements as well as strategic and IT projects were offset by savings on operating expenses, which were held roughly at the previous year’s level with a figure of € -184 (-183) million.

CET1 and leverage ratios at high levels – reduced risk positions
The capital ratios remained at a high level and well above the requirements thanks to the encouraging nine-month result and the considerably reduced risk positions. The Common Equity Tier 1 (CET1) ratio improved to 19.2 percent, including the effect of the second-loss guarantee (31/12/2016: 14.1). Even when disregarding the effects of the guarantee, this
worked out to an indicative, pro-forma CET1 ratio of 16.3 percent. The leverage ratio, i.e. Tier 1 capital in relation to business volume, rose to a very solid 7.8 percent during the period under report (31/12/2016: 6.9).

The Group’s total assets were down to € 76 (84) billion due to the accelerated wind-down of legacy assets, while the encouraging new business along with an increased cash reserve exerted a counter-effect.

Core Bank with considerable income growth – new business up 11 percent
The Core Bank’s income before taxes of € 609 (532) million was up significantly on the previous year. Contributing to this good result was the increase in total income to € 886 (799) million, which benefited from the operating business and from realising unrealised gains as planned of € 356 (160) million. Including these effects, net interest income improved to € 666 (537) million and net commission income was up to € 58 (57) million. Net trading income came to € 111 (145) million and net income from financial investments amounted to € 51 (60) million.

The Bank’s bolstered position in the market and its stable client base is reflected in new business, which was increased by eleven percent to € 6.4 (5.8) billion. With a firm focus on an appropriate risk/return profile, the Bank was successful in acquiring new business despite fierce competition: € 1.4 billion thereof was concluded with new clients gained this year. Cross-selling income involving investment products, loan commissions and the derivatives business also improved during the reporting period.

With new business of € 2.4 (2.5) billion, the Corporate Clients segment was nearly at the previous year’s level. The performance of the focal sectors of trade and food as well as project finance for infrastructure, data networks and renewable energy was especially encouraging.

The Bank succeeded in entering the Dutch market by financing a wind farm; it also signed deals involving projects in Finland, Ireland and Germany. The loan portfolio was up slightly on the previous year to € 14.3 (14.2) billion. With a figure of € 71 (64) million, the segment contributed an increased proportion of Group net income.

In the Real Estate Clients segment, the Bank’s good foundations in its home region as well as in the western German metropolitan regions once again bore fruit, with new business increased to € 3.4 (3.1) billion. The portfolio decreased slightly to € 11.9 (12.5) billion because of exceptionally large repayments. The real estate financing business made a key contribution to income with a sum of € 103 (110) million.

The shipping markets have shown signs of picking up in recent months, but they remain challenging. The Shipping segment’s new business was intentionally concluded on a restrictive basis and exclusively with international shipping companies that have a good credit rating. The segment was on budget with a figure of € 0.4 (0.2) billion. Net income before
taxes of € 7 (87) million reflected spending on loan loss provisioning and the guarantee as well as a dip in net interest income due to decreasing receivables (€ 6 billion, down from 7.1 billion as at 30/09/2016).

The Treasury & Markets segment was up significantly on the previous year with net income before taxes of € 428 (271) million. A positive trend in the client and derivatives businesses contributed to the good result, as did realising unrealised gains from the disposal of promissory notes in the amount of € 356 million.

Loan loss provisioning for legacy assets high, despite signs of recovery
Again in the first nine months of 2017, the Bank incurred heavy provisioning expenses for shipping exposures from the years prior to 2009 – despite signs of recovery on the markets for container ships and bulk carriers. In addition, there were valuation allowances in the legacy energy portfolio of the Non-Core Bank, which accounted for the vast majority of loan
loss provisions before guarantee, namely € -445 (-968) million out of a total of € -456 (-966) million. Due to the full utilisation of the federal states’ second loss guarantee on the balance  sheet in the first quarter, loan loss provisions were now offset only in part, in the amount of € 134 million (incl. forex result, hedging effect of the credit derivative and loss settlement effects). Loan loss provisions in the Group’s lending business after the guarantee thus amounted to € -322 (149) million.

Risk coverage and portfolio quality further improved – NPE ratio down
The Bank has significantly reduced its non-performing exposure (NPE) and existing cluster risks from the past thanks to a resolute and accelerated wind-down of such exposures. The amount in the Group was € 9.1 billion (31/12/2016: 14.6), of which approximately 90 percent was held in the Non-Core Bank. The improved portfolio quality is reflected in the NPE
ratio, which was down to 11.7 percent (31/12/2016: 17.5). The non-performing legacy exposures were covered by solid loan loss provisioning, meaning that the Group-wide coverage ratio (calculated from loan loss provisions in relation to NPE) once again showed a clear improvement to 55 percent (31/12/2016: 48).

Non-Core Bank with significantly reduced NPE volume
The dynamic and simultaneously asset-sparing reduction of non-performing and non-strategic portfolios from the years prior to 2009 is especially evident in the Non-Core Bank. Thanks to positive trends in the shipping market environment, stringent restructuring and the present US dollar/euro parity, the total amount was down considerably by € 7.4 billion to € 14 billion.
Within this total, the proportion of non-performing loans alone dropped to € 8.2 billion by 30 September – meaning that about 90 percent of the year’s target of € 7.5 billion was already achieved after nine months. This figure is expected to shrink to € 3.8 billion by the end of 2018 and to about € 2 billion after taking loan loss provision into account.

Outlook confirmed: Group profit seen at pre-year level
“Our strategic direction and accelerated wind-down of our legacy assets was rewarded at the end of October with several binding bids from interested international investors. We will remain on this path in the months ahead in the same concentrated and focused manner, continuing to support our federal state owners in the final phase of the sale negotiations to the best of our ability,” Ermisch said.

Based on the Group result after nine months the Bank reaffirms its forecast for pre-tax profit at the previous year’s level (€ 121 million) for the full year of 2017. 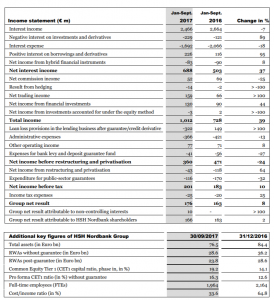