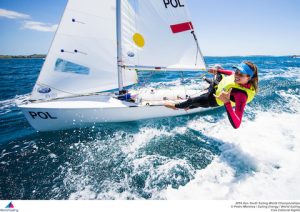 The 2017 Youth Sailing World Championships is fast approaching and as athletes begin to arrive in Sanya, China the expectation for the competition that lies ahead is building as the sailors weigh up their rivals.

With more than 380 sailors representing 62 nations, the pressure is beginning to build ahead of five days of racing. Sailors will have high hopes to make a name in the sport, following the pathway of some of the best sailors, who have also competed at the event.

Some of the biggest names in sailing have attended the Youth Worlds, including the five-time Olympic medallist, Ben Ainslie (GBR), and the recent 2017 Rolex Female World Sailor of the Year and current Olympic, Worlds and European Laser Radial Champion, Marit Bouwmeester (NED).

A total of 98 skilled sailors will be competing in the 420 class and there is plenty of attention on both fleets as plenty of new faces will be seen in Sanya.

The Girl’s 420 fleet will be seeing the return of the 2016 Youth Worlds Bronze winners, Violette Dorange and Camille Orion (FRA), hoping to snap Gold or Silver.

The 2017 Youth Worlds also welcomes last year’s competitors, Georgia Lewin-La France and Madeline Gillis, from Canada. With a whole year’s worth of experience and training, their desire to progress is at a high and they are certainly ones to watch out for. 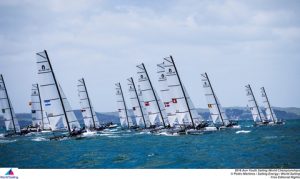 In the Boy’s 420 fleet, Edoardo Ferraro and Francesco Orlando (ITA), who finished fifth in the 2016 event, will be returning and have their eyes on the podium.

The two brothers from Uruguay, Nicolas Radovitzky and Martin Radovitzky, as well as Patrick Wilson and Arie Moffat (CAN), will also be returning with a chance of finishing higher on the leader board.

Winners of the 29er European Championship, Federico Zampiccoli and Leonardo Chiste (ITA), will be competing again at the Youth Worlds but this year they return with more experience in the bag.

Canadian 29er sailors, William Bonin and Samuel Bonin, will be attending for the first time but after winning every Canadian and North American event, the brothers enter the Youth Worlds with confidence.

William shares the story on how the brothers began sailing, “We looked into opening our summers to a new sport; sailing, after we moved from Ottawa in 2010.

“After a couple summers learning sailing basics, we both quickly found a passion for the sport and wanted to pursue it more competitively.

“Therefore, seeing as a brother duo would be most convenient, we split up for a short amount of time to learn individual roles. I went to the Laser Radial to learn tactics and strategy while Sam went into the 29er to learn the boat speed needed to be a crew. We partnered up a year later after small successes in our classes.

“Since then, it’s been a steep learning curve for Sam and I as we progressed through the 29er fleet. In 2017, our hard work had paid off seeing as we won every Canadian event we went to and North Americans. Our biggest achievement yet has been that we qualified for the 2016 Youth Worlds in China.”

In the Girl’s 29er, there will be 20 teams with Maiwenn Jacquin and Enora Percheron (FRA) and Zoya Novikova and Diana Sabirova, from Russia, the only returnees from 2016, meaning a new name will be engraved in the trophy.

The exciting Nacra 15 made its Youth Worlds debut in Auckland, New Zealand in 2016 and proved to be a hit amongst the sailors with high octane racing.

The class is still relatively new and much like 2016, the opening day will give insight into who the frontrunners will be. Mark Brunsvold and Dylan Heinz (USA), who won silver at the NACRA 15 North American Championships, last month, will be attending the Youth Worlds this year in the hopes to claim top spot on the podium.

You can keep up with all the action on water by following us on social media:

Sailors will be officially welcomed to Sanya on Sunday 10 December with the opening ceremony. Racing is scheduled to commence at 11:00 local time on Monday 11 Decemberand will conclude on Friday 15 December.