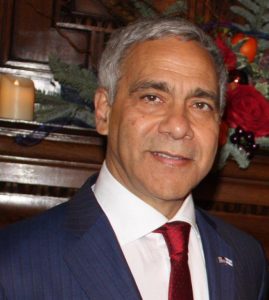 Managers of the American P&I Club were on song as the protection and indemnity mutual entered the latest stage of its centenary celebrations with its grandest annual London reception.

They hired one of the City’s most historic venues, the Merchant Taylors’ Hall, for a memorable festivity.

Guests – members and clients of the club and its sister insurers, brokers, analysts, researchers, media representatives and others – were treated early in the proceedings to a surprise single-handed rendering of That’s Life, a ballad made famous by Frank Sinatra. 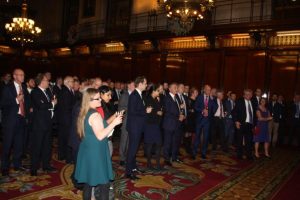 The singer on this occasion was Vince Solarino, president and chief operating officer of Shipowners Claims Bureau, the formal title of the management of the club.

Mr Solarino has entertained club gatherings before with his euphonious tones, most notably having performed the number at the club’s centennial black-tie dinner in New York in June 2017. On that occasion he was backed by a quartet of established vocalists.

On stage at the London gathering, the band for the evening admitted that the song was not in its repertoire, so Mr Solarino went ahead a cappella and his bravura delivery won loud applause from his audience. 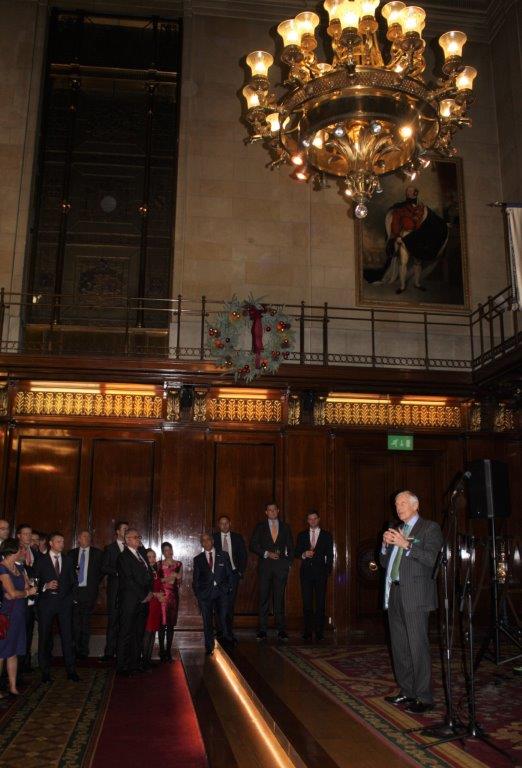 His mastery of the tricky vocal line a puppet, a pauper, a pirate, a poet, a pawn and a king went down, perhaps one should avoid the phrase in a marine gathering, a storm. The lyrics could be seen by some as a symbol of the determination of marine insurance and the maritime industry to weather the volatility of their markets: “you’re riding high in April, shot down in May…back on top in June.”

The song was first recorded by Marion Montgomery in 1963, but came to worldwide attention three years later in its most famous version by Francis Albert Sinatra (1915-98). 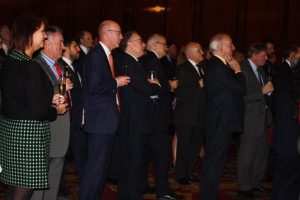 Section of the audience

Mr Hughes provided his own brand of entertainment.  He did it – pace Sinatra fans – his way with one of his hilarious “true stories.” Mr Hughes departed though from the key element of his traditional December presentation: facts and figures and prospects for the club and the wider industry (although in terms of recent club performance, that is a good story, including substantial increase in tonnage and premium, positive claims experience, zero general increase and rising investment returns). He expressed clearly although briefly his pride in the club’s membership, its achievements in constructive expansion and the valued support from colleagues and brokers past and present. 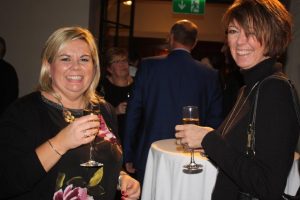 Mr Solarino sang – in prose – the praises of many individuals in the group’s New York, London, Piraeus, Cyprus and Asian offices who had contributed greatly to progress over the years.

Mr Solarino’s roles include the chairmanship of American Hellenic Hull, which was launched in September 2015, to offer international blue-water marine hull cover. Based in Limassol and Piraeus, it was the first marine insurance company in Greece and Cyprus to fulfil all regulatory requirements under Solvency II. 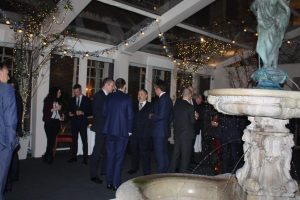 Drinks in the courtyard.

For the party, guests had the run of splendid facilities of Merchant Taylors’ Hall: the chandeliered great hall, the winter-roofed and warmed courtyard garden, and the far-from-austere cloisters.

Fine wines and other libations were offered, and service of American-themed appetisers including mini-hamburgers, chicken, lamb, mince pies, apple pie and chocolate desserts made the rounds time and again.

Merchant Taylors’ Hall is one of the Great Twelve livery companies of the City. Livery companies were formed out of the old guilds in medieval times to protect the interests of various trades. 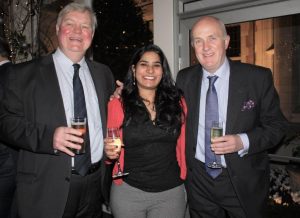 One of our erudite press colleagues told us in conversation that to the Merchant Taylors could be attributed the origin of the phrase “at sixes and sevens,” an idiom in modern English used to describe a state of confusion. The Merchant Taylors had been involved in a dispute with the Skinners, both founded in 1327, over the order of precedence among City livery companies (there are 108 companies today). In 1484 the Lord Mayor of London at the time Sir Robert Billesden ruled that every year, the companies would alternate between sixth and seventh place, and feast in each other’s halls.

According to its official history, Merchant Taylors’ Hall has been on the same site in Threadneedle Street since 1347, when the company acquired the mansion house of John de Yakeslee, pavilion maker to Edward III. The building was burnt out in the Great Fire of 1666, and later rebuilt. In 1940 the dining hall, staircase, parlour and drawing room were again burnt out, but the south and east sides of the hall survived. It remains a popular venue for many types of event. 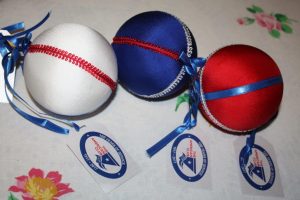 As Old Blue Eyes would have observed: That’s life – that’s what people say.