For 10 days in early December, the map of London – artistically speaking – took on an eastward tilt.

A wealth of screen-printing and etching from more than 90 members of East London Printmakers decked the curvatures of the Art Pavilion, Mile End, a glass-fronted, grass-roofed gallery, in the organisation’s annual Festival of Print. Who would live in a house like this? (I)

The show underlined the popularity of the printmaking craft and how it can readily provide a tableau of talent. Pop imagery, industrial architecture, dreamscapes, abstracts, Greek mythology – and of course seashore and marine themes, as is ever the case in group exhibitions – were among subjects covered in limited edition prints. There was even a boxed set of prints to buy with small studies provided by many of the exhibitors.

Artists were on hand to explain the intricacies of their technique, among them Joanna Pawlowska, who like many of the group lives and works in the city.

The two screen-prints she showed owed their inspiration from her visit to the United States, and addressed how the appearance of where people live could offer insights into their status and outlook on life. Dream of Eleusis. By Rosalind Whitman.

A large, modern multi-roomed house is pictured under the title Who would live in a house like this? (I).

Above it, an image of a smaller, old-style weatherboard house was titled similarly Who would live in a house like this? (II).

The first house Joanna photographed in Kansas City and the second in Greencastle, a small, generally well-to-do community in Pennsylvania. “They are both family houses, but how different in size and appearance!” commented Joanna.

“I grew up in Poland [she was born in Słupsk, in the north of the country] in a country house looking a bit like the one from Pennsylvania. It means a lot to me that the house still belongs to my family. It continues to connect me to my ancestors, my childhood and my Polish culture. “Looking at these American houses brought up to me all those memories of my own past, and made me think about the present occupants of both properties: how different they must be in every aspect. Probably one family is young and the other older, one living for the future and the other already in the past, with a much memory baggage… just like I have.”

Joanna explained how the dramatic pictorial effect is wrought. She said: “Both screen prints were made using a four-colour separation technique which means that each colour (in this case yellow, magenta, cyan and black) was separated In Photoshop and made into bitmap images. Those bitmap images were then used to produce acetates from which I created four screen-print templates.

“The final image was created by printing one colour over another, starting with the yellow.” Like many printmakers, Joanna is an eminently practical person. She loves inventing gadgets, and just over five years ago came up with what she called the Squand. It is a squeegee-stand tool very handy in screen-printing. She invented it while attending a screen-printing course at Hampstead Institute and saw that people needed somewhere to rest the implement between printing.

All the ink from printing stays on the rubber while the handle remains clean in its stand to minimise the risk of spill.  The Squand is made of durable and recyclable material.

It took four and a half years to obtain a patent for the invention, and now it has its own website www.squand.co.uk.

Joanna, who has a fine art degree from Central Saint Martins in London and Master of Science from Łódź, the third largest city in Poland, often focuses in her painting, printing and photography on migration, strangeness and social isolation, deriving most of her inspiration from everyday life. When travelling, she likes to carry her iPad for sketching. Representing Poland, she was one of 19 international artists taking part in 2016 in a public art project called Weltwand Minden (meaning world wall Minden, which is a town in North Rhine-Westphalia, Germany). Each artist was asked to make a sketch based on a personal selection of any of the 17 United Nations sustainability goals. In support of gender equality, Joanna’s contribution showed a same-sex kiss, still considered a provocative action in Poland.

Among entries for the East London Printmakers festival was a hand-coloured etching Dream of Eleusis by Rosalind Whitman. She skilfully captures the atmosphere of the Eleusinian Mysteries, annual secret rites in the cult of Demeter, goddess of harvest, life and death, and her daughter Persephone, queen of the underworld. Eleusis, outside Athens, has become an important archaeological site. Bottle at the Sea. By Annaig Catesson.

If you believed in ancient myths, it would be a challenge to look at the work of Annaig Catesson. She depicted in etching and aquatint Medusa, the Gorgon who had poisonous snakes for hair, and who turned to stone those who dared look upon her awful face. There are three other companion pieces, also in atmospheric colour, by Annaig including Bottle at the Sea. Born and bred in Brittany, Annaig says that her work is inspired by sea creatures, legends and tales. She works mainly on zinc and copper using etching and aquatint, and on linoleum.

Swayed too by tides and time is Janet Wilson, who showed Aqua, in etching and monoprint. Janet produces collagraphs, etchings and monoprints “which aim to evoke both a sense of place and the sublime character of the natural world. Inspiration comes from the movement of weather and tides, in mapping, aerial views and the examination of scale – from the great to the microscopic.”

Bronwen Paterson used monoprint with pen to produce Tokens and Amulets. She has a fine arts and graphic design background and recently obtained a BA degree in Surface Design, mostly concerned with screen-printing – all elements that she draws upon for her output.

Four etchings of Life at the Seaside were displayed by Ivy Smith. Based in Norwich, Ivy paints portraits sometimes on a large scale, and produces woodcuts, etchings and lino prints of her main interest, the human figure in motion. She is among those taking part in The Great Print Exhibition 2017 which runs until February 18, 2018 at Rheged Centre, Penrith, Cumbria. 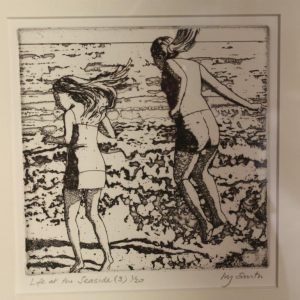 Life at the Seaside (3). By Ivy Smith

With its ability to capture light on the dullest of days and with a water course outside, Mile End Art Pavilion with its 480 sq m exhibition floor has a soothing, contemporary feel, and would seem miles away from the metropolis but for large housing blocs on the near horizon.

Mile End was the name of a hamlet first recorded in the 13th century one mile from Aldgate (these days the distance can be measured as three Tube stops from Aldgate East) and hence on the outskirts of the modern City.

East London Printmakers was formed nearly 20 years ago, and is in the second year of its permanent home beside Mile End Park, in Copperfield Road next to Regents Canal. The organisation has 47 keyholders, 250 supporters and over 1,000 visitors a year. Tokens; and Amulets. By Bronwen Paterson.

As well as providing professional-standard and affordable printmaking facilities for its artist and designer keyholders, the studio offers workshops and activities, including screen-printing on paper and fabric; relief printing in lino, wood and Japanese vinyl; and instruction in intaglio, including etching on metal.

Open access sessions on Thursdays and Saturdays welcome printmakers to use the facilities at a charge. The studio is self-described as “a remarkable thing: an affordable, professional, exciting and self-supporting arts facility based on the cooperation of its members, creating an accessible and vibrant community where people interested in printmaking can both learn and share knowledge.” 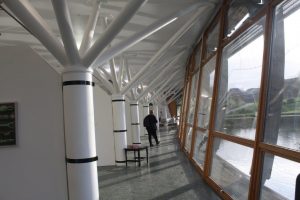 One of the exhibition walls.