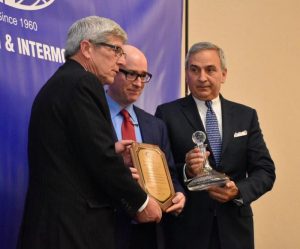 Newark, NJ (December 15, 2017) –  Brad Jacobs, Chief Executive Officer of XPO Logistics, was presented with the 2017 Connie Award by the Containerization & Intermodal Institute (CII) on December 11th at the newly renovated Robert Treat Hotel in Newark. The Port Authority of NY & NJ also received special recognition for its role in the Bayonne Bridge Raise the Roadway Project.
This year’s luncheon marked the 25th year of the Connie Award Scholarship Program, and celebrated that anniversary with a record-breaking number of scholarships and a total distribution of more than $200,000.
For 46 years, Connie recipients have been acknowledged for their significant contributions to containerization in world trade and the transportation industry. This prestigious award honors their individual accomplishments or the companies at which they have built their careers and the impact they have made.
The approximately 375 guests of the Connie Award Luncheon were treated to a dynamic presentation as Brad Jacobs elected to conduct a lively Question and Answer format rather than a traditional acceptance speech. 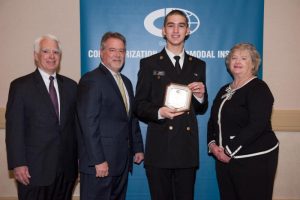 After graciously accepting the award, Mr. Jacobs went on to say: “I work with an A+ team, and as much as I appreciate receiving an award like the Connie Award, I am not comfortable accepting credit for the work of an entire team. There are many people involved in every success.  My main role is to be the conductor who helps the orchestra play together and focus on beating the competition instead of beating each other.”

Brad Jacobs is the architect of the industry’s most exciting success story. He founded XPO Logistics (NYSE: XPO) in 2011 based on his belief that the logistics industry offers exceptional potential for growth. Under his leadership, XPO is using its technology and scale to transform how goods are moved around the world for customers. Today, XPO is a top ten global provider of cutting-edge supply chain solutions and generates approximately $15 billion of revenue. The company operates in 31 countries, with 1,435 locations and more than 90,000 employees serving over 50,000 customers.
The Bayonne Bridge Raise the Roadway Project allows megaships to reach terminals west of the Bayonne Bridge which are those in Newark Bay as well as Staten Island. This endeavor elevated the roadway that links Staten Island, NY with Bayonne, NJ, raising the navigational clearance under the Bayonne Bridge from 64 feet to 215 feet, thereby allowing larger, modern container ships to travel under it. The project commenced in 2013 and was completed on June 8, 2017.
“CII puts a high value on endeavors that enhance the movement of containerized cargo and we appreciate the hard work that went into this project,” said CII President, Michael DiVirgilio. “We also know that it could not have been done without the cooperation and support of all of the men and women throughout the Port transportation, logistics, distribution and labor sectors.”
CII SCHOLARSHIP PROGRAM
At the Connie Award event, CII also carried out its education mission by presenting 28 scholarships   to students and institutions that share the same commitment to educating future generations.
According to CII Vice President, The Honorable Steven Blust: “The increased number of scholarships was a result of the generous donations from industry leaders and companies.  Under the auspices of CII, more than $850,000 in scholarships have been awarded since 1992.”
Presented by Mr. Blust, who is also a former chairman of the Federal Maritime Commission, the Institute awarded scholarships to students from Rutgers, Seton Hall University, and to the State University of New York Maritime College at Fort Schuyler pursing careers in the industry.
CII’s Richard A. Simpson scholarship was awarded to a midshipman at the United States Merchant Marine Academy. In an effort to support on-going education, CII awarded a scholarship to the Careers in Transportation Scholarship Fund at Union County College.
For the second year in a row, CII awarded a scholarship in the name of the late Honorable Helen Delich Bentley to the University of Baltimore’s School of Business General Scholarship Fund.
New to the scholarship program, XPO Logistics and Columbia Group awarded scholarships to deserving students from Eastern Michigan University and State University of New York Maritime College, respectively.
Continuing their support were Barbara and Joe Yeninas, Ceres Terminals, Evergreen Line, Hapag-Lloyd, The Journal of Commerce, the Institute of International Container Lessors, Norton Lilly International, Port of Long Beach, Portwide Cargo Securing Company, New York Shipping Association and United States Maritime Alliance.
Crowley Maritime Corporation continued its annual scholarship presentation in conjunction with the United States Merchant Marine Academy at Kings Point, a tradition held since 1992, which commenced the CII scholarship program.
Finally, Global Container Terminals (GCT) donated a full four-year scholarship to a midshipman at SUNY Maritime College. GCT furthers its tradition of giving full educational opportunities. All of the recipients have demonstrated a commitment to excellence within their respective programs of study.
About CII
Containerization & Intermodal Institute (CII), a non-profit organization founded in 1960, promotes industry awareness, preserves the history of intermodalism, and engages scholarly interest in the field by organizing educational conferences and seminars, serving as an information resource, providing networking opportunities, offering career guidance, arranging internships and facilitating scholarships. For more information, visit www.containerization.org
2017 Connie AwardBayonne BridgeContainerization & Intermodal InstituteRoadway ProjectThe Port Authority of NY & NJUSA
0 comment
0
FacebookTwitterLinkedinEmail