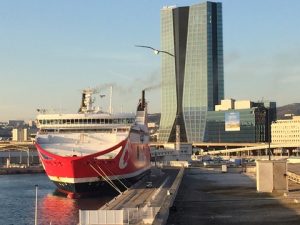 The Marseille Fos port authority is making a further 50 hectares of space available for development at the Feuillane logistics park close to the Fos container terminals.  The initiative marks growing demand for large-scale warehousing, a trend that is being echoed in nearby Distriport.

An appeal for expressions of interest at Feuillane has been launched to ensure a fair and competitive process among potential developers and occupiers.  Proposals are being invited for three areas of between 12 and 19 hectares in the north of the zone.  A deadline of January 4 has been set, with the eventual projects expected to be operational by around 2019-2020.

The existing 70-hectare La Feuillane site offers 364,000m2 of warehouse capacity, with 149,000m2 currently in use and the rest under construction.  Furniture giant IKEA was the first occupier in 2007 after building a warehouse to supply its stores in France and southern Europe.  French furniture retailer Maisons du Monde followed with two warehouses and also has a third in the Fos Distriport zone.  Among latest projects, a 45,000m2 warehouse from property developer Idec Life is due on stream in early 2018 for XPO Logistics, a top ten global provider.

Meanwhile Marseille-based edible oils producer and bulk storage specialist Mediaco Vrac is to build its third warehouse in Distriport.  Adding to facilities totalling 65,000m2 that entered service in 2011 and 2014, the company is more than doubling its capacity with a 70,000m2 development catering for volume growth from its international third-party clients.