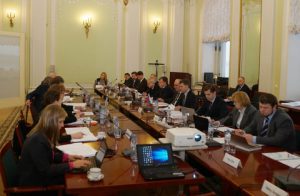 From the meeting: the two delegations

Russia and Finland have confirmed their readiness to implement the Agreement between the governments of Russia and Finland on Cooperation and Interaction in Icebreaker Assistance in the Baltic Sea, a transport official told IAA PortNews on the sidelines of the 38th meeting of Russian-Finnish Mixed Commission on Maritime Shipping.

Vitaly Kluyev, the Commission Co-Chairman, Director of Transport Ministry’s Department of State Policy for Maritime and River Transport said that there are no problems with the Agreement implementation as “both parties are ready to provide icebreaker assistance if necessary”.

FSUE Rosmorport has already signed commercial agreements with the Finnish Transport Agency and Arctia Ltd. (operator of icebreakers in Finland). Besides, the parties have held meetings in the format of staff exercise for detailed elaboration of the cooperation procedures. 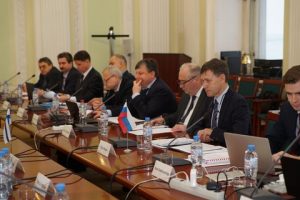 According to Andrey Balashov, Deputy Director of Rosmorport’s North-Western Basin Branch for Safe Navigation, daily rates for icebreaker services are to be confirmed. Markus Karjalainen, head of Finland’s Transport Services Department, referred to the work performed by the Russian side as effective and said that the agreement between Rosmorport and Finnish Transport Agency will be extended for a year. Yury Pankrashkin, Deputy Head of Rosmorrechflot’s Department for Safe Navigation, added that at least 13 icebreakers will be deployed in the Baltic Sea to assist shipping and one icebreaker as standby vessel. Two additional vessels can be deployed under a special decision. Rosmorport will also beef up the icebreaking fleet with ice-class tugboats.

The Russian side of the commission invited Finland to designate a common water area in the Gulf of Finland requiring no ballast water exchange. Vitaly Kluyev said that the Ballast Water Management Convention (BWMC) entitles two countries to agree on non-application of the requirements to vessels sailing only between these two countries. The official also emphasized that navigation on the Saimaa Canal as a separate issue when it comes to BWM Convention. Risto Murto, the Head of the Finland’s delegation, promised a closer look at the matter having recognized the proposal of the Russian side to be interesting. 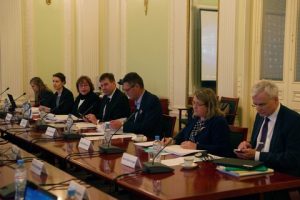 Russia and Finland also are going to come forward with a joint initiative at the International Maritime Organization (IMO) for introduction of ship’s documents in e-format. Russia’s State Duma has approved recently in the third and final reading the draft law “On Amendments to the Merchant Shipping Code of the Russian Federation” that would allow issuance of seafarers’ certificates in electronic format. The draft law is currently under consideration at the Federation Council. The Russian side is preparing a proposal to be submitted to IMO’s Maritime Safety Committee at its meeting in May 2018 and has invited Finland to co-sponsor this initiative. Besides, State Duma is now considering a draft law that will allow keeping vessel’s papers in e-format.

The Commission also supported the Finland initiative to submit a proposal to IMO on evaluation of the regulatory framework for unmanned ships. Risto Murto, representative of Finland’s Ministry of Transport and Communications comments: “Finland, together with other countries, will come forward to IMO’s Maritime Safety Committee with an initiative to improve mechanisms and evaluate regulatory framework for unmanned ships. In spring 2017, Finland opened world’s first open test area for unmanned ships in the Baltic Sea expecting to offer unmanned navigation products and services by 2025”.

Vitaly Kluyev told the meeting about MariNet, the National Technological Initiative (NTI)’s worcking group. One of MariNet key tasks is the research related to unmanned navigation. “In the Gulf of Finland, we have created an experimental water area with monitoring and testing facilities for unmanned navigation. In 2018, we are going to create similar water area in the Southern Basin, in the Sea of Azov and in the Black Sea. We are also studying international legislation on unmanned navigation and support joint efforts in this respect”, said Vitaly Kluyev.

Russia and Finland also have similar positions on double control of fuel used by vessels under EU MRV and IMO regulations. The Russian delegation emphasized that EU decision to monitor ships’ fuel consumption and CO2 emissions from 1 January 2018 (entered into force in 2015) is a “decision of regional character on a global issue”. Similar requirement is foreseen by IMO documents from 1 January 2019. “IMO is a body to make decisions on GHG emissions from ships and IMO should be the only body to make such decisions in respect of ships because shipping is global”, Russian Co-chairman said adding that the positions of Russia and Finland on this issue are similar. The Russian side sees it reasonable to decrease the load on ship owners and protect their commercial interests through introduction of a common international standard for collection of data on СО2 emissions from ships (it can be an IMO DCS standard).

Finally, the two sides said that outright prohibition of using HFO in the Arctic region is inappropriate. Instead, adequate and technologically feasible measures on minimization of environmental risks should be undertaken to prevent pollution caused by ships, particularly those carrying crude oil and oil products as cargo or as bunker fuel. Russian delegation supported the proposal of Finland to bring up the issue of HFO in the Arctic for consideration at the Arctic Council (next meeting will be hosted by Quebec, Canada, in February 2018).