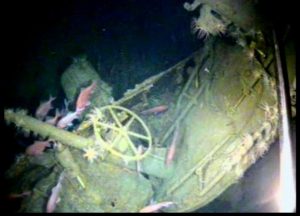 In waters over 300 metres deep, Fugro deployed its autonomous underwater vehicle (AUV) from survey vessel, Fugro Equator. On Wednesday, 19th December an object of interest was located and further inspection confirmed that it was AE1.

Using specialised survey technology, including a multibeam echosounder mounted on the hull of Fugro Equator and itsEcho Surveyor 5 AUV, Fugro scanned the seafloor to collect detailed data. The AUV flew at a constant altitude of 35 metres, through strong undersea currents and the complex terrain of the search area, that was located between two land masses.

The resulting 1-metre resolution images provided confidence that positive identification of targets could be made. Following analysis of the data, unusual features were catalogued, assessed and prioritised for additional detailed investigation that included AUV and drop camera operations. The first images captured show the vessel is remarkably well preserved and apparently in one piece.

“The success of this campaign is due to the efforts of all the teams involved and as one of the world’s most experienced operators of AUVs, Fugro is proud to have been a part of the search,” said Paul Seaton, Fugro’s Regional Business Development Manager. “It is particularly rewarding to know that the information gained from this expedition will be held by the Australian National Maritime Museum for future generations to remember.”

Following the discovery of the submarine, a small commemorative service was conducted onboard the Fugro Equator to remember the 35 crew, made up of Australian, New Zealand and British subjects, who lost their lives in 1914. Efforts are being made to contact the descendants of the crew.

A single market for shipping – time to make it happen