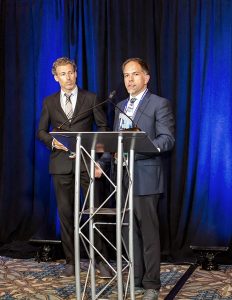 Fugro has been honoured with an Environmental Leadership Award from The Maritime Alliance, a California-based non-profit organisation that promotes sustainable, science-based ocean and water industries. The recognition was received in San Diego during the organisation’s BlueTech Week, an international gathering of over 485 marine professionals from academia, government, and industry.

Sharing in the award was Planck Aerosystems, a drone intelligence company specialising in highly autonomous unmanned aerial systems. Fugro collaborated with Planck Aerosystems on a project to identify and map oil seepage from abandoned offshore well sites in Santa Barbara County. The work was performed for long-time Fugro customer Aqueos Corporation under contract to the non-profit environmental group Heal the Ocean. Results from this project prompted the California State Assembly to pass legislation SB-44 funding a legacy oil and gas well removal and remediation programme through 2028. The legislation was signed into law in October.

The Maritime Alliance cited the Fugro/Planck Aerosystems collaboration as a prime example of member companies working together for mutual benefit, as well as to the benefit of the ocean environment. Craig McLean, assistant administrator and acting chief scientist for the National Oceanic and Atmospheric Administration (NOAA), presented the awards.

“We are grateful to be recognised by The Maritime Alliance for this collaboration,” said Todd Mitchell, remote sensing manager for Fugro. “Partnerships such as this are an important part of our business process, and we are pleased to have helped facilitate a solution that has effected legislative change for the good of all stakeholders.”

In addition to the Environmental Leadership Award, Fugro received a Certificate of Special Congressional Recognition, signed by Representative Duncan Hunter.

The New Year’s event of Model Ships in Greece (VIDEO)