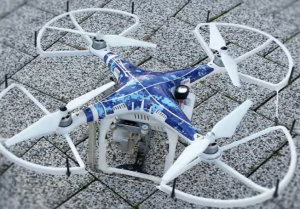 DJI PHANTOM – The DJI Phantom drone can operate for about 20 minutes and is lighter than the Custom drone. It is used for external surveys but can also be flown inside spaces such as tanks. When fitted with its protective shield it is more resistant to damage

Alba is one of DNV GL’s 16 drone surveyors. Today, he is testing the Custom drone’s stability in different wind conditions and the stability of the video transmission – an important factor during the inspection of remote structural
components in tanks and cargo holds. 18 months after DNV GL carried out its first production drone survey in June 2016, it has become the leading provider in this field. “When we started out, we wanted to find a safer, more efficient and cheaper way of fulfilling the requirements of close-up surveys. During these inspections, a surveyor has to be able to touch a surface to check the condition of the material,” explains Cezary Galinski, Senior Principal Surveyor and Head of the DNV GL drone squad.

Viewers can log herebelow and read the full report/article: